Directed by Ilisa Barbash, Lucien Castaing-Taylor
An interesting documentary about the last large sheep drive in Montana with cowboys who are not romanticized.

In 2001, husband and wife filmmakers and anthropologists Ilisa Barbasdh and Lucien Castaing-Taylor spent time high in Montana's Beartooth Mountains filming the last sheep drive — a 200-mile journey. Before this dramatic event, we meet these stubborn animals as they are sheared by men in small sheds who then send them out into the cold. A more compassionate treatment of them is given when various men help newborn lambs emerge from their mother's bodies and struggle to find a place to nurse.

As the large caravan of sheep (nearly 3,000 of them) begins their long journey, we watch as they move across fields in a never-ending stream of white. Sometimes the herders on horses are successful in getting them to go where they want. Other times, not even the highly skilled dogs can keep them on track.

After a long drive, the sheep reach the highlands and are watched over by two men. One is the archetypal cowboy, John Ahern, who talks to his horse, sings songs to entertain himself, and seems satisfied to be under the big sky in wild country. The younger man, Pat Connolly. doesn't seem to have adapted well to this solitary labor and his routine responsibilities. He has a meltdown and curses the sheep and everything that is part of the drive. Connolly calls his mother and lets her know of his distress. Meanwhile, the two cowboys have to be vigilant in their watch since hungry bears are looking for meat to eat.

Sweetgrass pays tribute to another vanishing way of life but the filmmakers refuse to romanticize the sheep herders. However, unlike other indigenous nomads we've seen in documentaries, these two cowboys seem to be deficient in their connection with the sheep and with the magnificent land they are traveling through. For Connolly it's just another boring and lousy job. 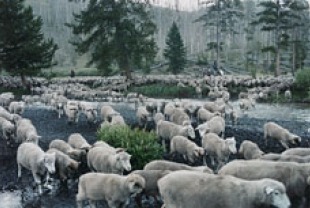 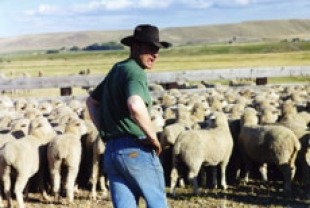