Directed by Noah Baumbach
An original and fresh romantic comedy about a difficult person who is trying to get unstuck from his bad habits, cynicism, and fear.

Roger Greenberg (Ben Stiller), taking a break from his work as a carpenter in New York City, heads out to Hollywood Hills to house-sit for his affluent brother who is traveling to Vietnam with his family. Roger has had some sort of nervous breakdown and now wants "to do nothing." Florence (Greta Gerwig), his brother's personal assistant, seems willing to help him out since he doesn't drive. She picks up a few things for him at a store. Florence has very low-self esteem and as a result is desperately seeking a romantic relationship with someone special who will light up her life. At night, she has meaningless sex with strangers and occasionally sings at a local spot. Florence has a special place in her heart for the family dog, Mahler, which she walks.

Since both Roger and Florence are awkward and unsure of themselves, they begin a romantic relationship that unfolds slowly and is filled with obstacles and setbacks. Roger, the classic back-seat driver, is critical of Florence on many different levels. This New Yorker is also a very angry man who shoots off hostile letters to businesses and other institutions. In social situations, he is toxic and negative. Spiritual writer Eknath Easwaran has described this kind of difficult person as "a lash in the eye."

In addition to his start-and-stop relationship with Florence, Roger reconnects with an old musician friend, Ivan (Rhys Ifans). They had a promising future as members of a band when Roger sabotaged the record deal. He is still feeling guilty about the past and wonders what might have come of them if the deal had gone through. Ivan has a family and has moved beyond the past. Roger also tries to hook up with an ex-girlfriend (Jennifer Jason Leigh) but she isn't interested in yesterday either.

Noah Baumbach has written and directed Greenberg which comes across as a totally fresh and original romantic comedy. Ben Stiller is just right as Roger, a difficult person who rubs people the wrong way and resides in his own narrow world of anger, cynicism, and fear. The fact that Florence can feel attracted to him is credible given her own insecurities and dependent personality.

The real thematic focus of the film is the hard time Roger has getting beyond being so immobilized in his life. At middle-age he feels cut off from those younger than he is (see the evidence of that in a scene with a band of youth) and knows he needs to take stock of who he really is and what he wants. Near the end, we feel some empathy for Roger as he struggles to free himself from being stuck in the past, in his bad habits, in his anti-social behavior, and in his rampant negativity. The only way out is to make a leap in the dark and change.

Special features on the DVD include a Behind-the-Scenes Look at Greenberg; "Greenberg Loves Los Angeles"; and "Director Noah Baumbach Takes a Novel Approach." 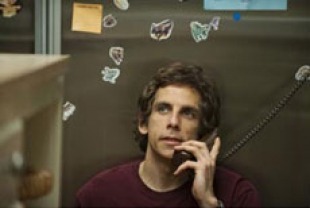 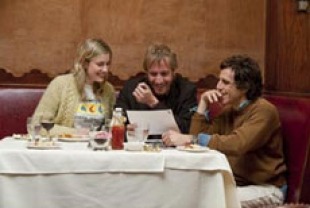 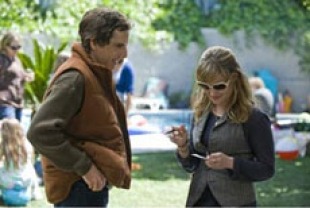