Syracuse (Colin Farrell) is a moody Irish fisherman who is a recovering alcoholic. He has left his wife who is still drinking with her new partner. Their daughter Annie (Alison Barry) has kidney disease and gets about in a motorized wheelchair. She lives with her mother but visits Syracuse regularly. One day during her dialysis, he tells her a fairy tale about a fisherman who pulls a beautiful young lady out of the sea in his large net. He is astonished that she is alive and finds himself mesmerized by this woman of the sea who calls herself Ondine.

Annie is convinced that this story is true and that it has happened to Syracuse, and she is right. Checking out all the books at the library about a "selkie," a mermaid-like creature popularized in Irish and Scottish mythology, Annie learns that she communicates not through words but by song. A selkie also has magical powers as Syracuse discovers when he takes Ondine (Alicja Bachleda) out in his boat fishing, she sings to the sea, and he brings in a large catch of lobsters. Another time, he takes to the market a huge catch of salmon.

When Annie meets When Ondine, they immediately hit it off. Syracuse falls in love with this mysterious woman but is fearful that she will either bring something wonderful or terrifying into his life. She likes to stay out of sight and seems to be frightened of something.

Neil Jordan directs this enchanting Irish drama that is a touching tale of love, redemption, and healing. The remarkable photography of Christopher Doyle catches the exotic land and seascape of Cork, Ireland. There are moments in Ondine that bring to mind The Secret of Roan Inish written and directed by John Sayles. Both are set in Ireland and revolve around mysterious sea creatures. Writer and director Jordan has drawn fine performances out of Colin Farrell, Alicja Bachleda, and Alison Barry. Also appearing in the drama is Stephen Rea as a laid-back priest who listens to Syracuse's confessions. The recovering alcoholic sees the priest as a convenient stand-in for a local AA meeting.

The only drawback to Ondine is that the heavy Irish accents sometimes make the dialogue incomprehensible. But stay with this adult fairy tale which, in true Jordan fashion, has some surprising tricks up his sleeve for the finale. 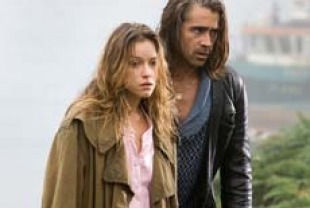 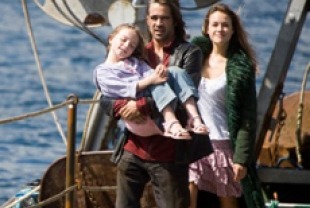