Directed by Zhang Yang
A wonderful Chinese road movie about a kind-hearted and resilient working-class laborer who takes on a difficult mission out of loyalty for a friend.

Zhao (Zhao Benshan), a Chinese construction worker, is drinking with his best friend, Liu (Hong Qiwen), only to discover that his friend has not passed out from the liquor but has died. Out of loyalty, Zhao decides to take his body to the family that his friend has not seen for years — by bus, since he doesn't have much money. That turns out to be a bad idea when some robbers get aboard and demand everyone's money and jewelry. The leader (Guo Degang) of the gang listens to Zhao's story about his friend's death and then allows him to keep the little money he has for the long trip. However, the other passengers are not as kind or understanding; they demand their money back if they have to travel in the same space as a corpse. Zhao has no choice but to strap Liu on his back and carry him along the side of the road.

The people this patient traveler meets on his picaresque journey are a mixed lot of decent and nasty individuals. A sad truck driver confesses to Zhao about his heartbreak over the loss of the woman he loved. Going through a town turns out to be too hazardous, so Zhao props Liu up as a scarecrow in a field of grain. He then crashes a funeral and, grieving the loss of his friend, breaks down in front of the casket of a lonely rich man (Wu Ma), who later joins him for a chat — because it turns out that he is rehearsing his own funeral. He gives Zhao a cart to carry Liu in which lifts Zhao's spirits. A zealous young cyclist (Xia Yu) who wants to tackle the challenges of Tibet also cheers Zhao. A greedy roadside restaurant owner (Liu Jinshan) gives Zhao a hard time, and he is beaten up. Despairing over the loss of his money and the depletion of his energy, this loyal friend wants to lay his burden down. He is rescued by a family of beekeepers (Guo Tao, Chen Ying) who provide him with some natural food and the inspiration to carry on.

Getting Home, is directed by Zhang Yang (Quitting, Sunflower) based on a true story. He has worked wonders with the material and turned it into a deeply spiritual road movie. Zhao is such a kind-hearted, gregarious, and resilient soul that we completely identify with his physically exhausting mission to return Liu's body to his relatives for a proper burial. It is sporadically humorous to see the clever ways this working-class stiff finds to transport Liu: in one scene, he stuffs him in a large truck tire and rolls him down the side of the highway. The sensitive screenplay by Zhang Yang and Wang Yao makes it clear that Zhao is completely dependent on the kindness of strangers as he tries to complete his mission. A final and totally unexpected encounter opens Zhao to some wonderful new possibilities.

As the Getting Home credits rolled, we thought of Sir Winston Churchill's observation "We make a living by what we get, we make a life by what we give."

The DVD bonuses include a discussion guide and a trailer about other Global Lens productions. 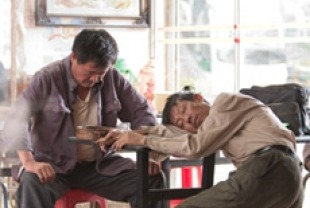 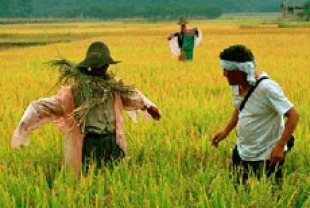 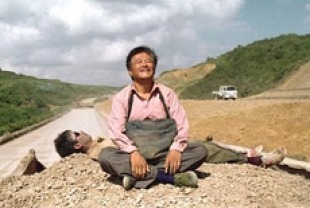