Directed by David Yates
The three young wizards on a quest that will test their loyalties, courage, and magical abilities to the max.

Harry Potter and the Deathly Hallows: Part 1 is the first of a two-part finale to the wildly popular franchise based on J. K. Rowling's books. Harry Potter (Daniel Radcliffe), the Chosen One, is being prepared for his final confrontation with Lord Voldemort (Ralph Fiennes). The Death Eaters under the Dark Lord's command have taken control of the Ministry of Magic; magicians and witches suspected of being half-Muggle are being arrested; and chaos reigns on the streets. Harry Potter (Daniel Radcliffe) is the #1 target of the Dark forces.

Harry's allies have an elaborate plan to move him to a safe house. Six of them take a potion that makes them look like Harry to confuse any attackers on the journey. The ensuing aerial battle is presented with visual pizzazz, which doesn't detract from our dismay and sorrow when one crucial member of Harry's world doesn't survive it.

Later, at a wedding, the Minister of Magic (Bill Nighy) arrives with gifts from the final bequests of Hogwarts headmaster Dumbledore for Harry, Ron (Rupert Grint), and Hermione (Emma Watson). Although they are pleased with these gifts, they wonder about the wisdom and priorities of their deceased mentor. He has given them a charge — to find and destroy the Horcruxes, in order to finally defeat Voldemort. But he has left it to them to figure out how to do this.

This part of the Harry Potter saga is quite different from those that have come before it. For most of the film, Harry, Ron, and Hermione are on their own, separate from their school friends and Ron's family, as they go on a quest to locate and destroy Horcruxes, which they believe are key to the final destruction of Voldemort. These three friends have bonded together in a refreshing way, but their loyalty to each other is severely tested as they adjust to and accept each other's unique talents.

They get one Horcrux, a locket, by assuming the looks of three employees and infiltrating the Ministry of Magic. In perhaps the most fascinating theme in the drama, every time one of the young wizards wears the Horcrux, he or she becomes more angry, paranoid, or critical. Their isolation and the influence of the locket cause a great deal of discord between Harry, Ron, and Hermione as they seek the sword of Gryffindor which can destroy this negativity object before it destroys their friendships.

Another interesting dimension of this film is the dominant role played by Hermione as she constantly applies her logic to the dilemmas and challenges they face together in the world. She provides them with things they need from her all-purpose bag and with the spells she casts. When a rift develops between Harry and Ron, Hermione is deeply upset. In a scene out of a romance drama, she and Harry improvise a dance that calms their agitation and frustration.

David Yates directs this dark and gloomy film which foreshadows some of the battles to come, and fans will find it a good match to the moody narrative of J. K. Rowling's book. The landscapes the young wizards travel through mirror their challenges. In a lush forest, Hermione's spells protect them from being discovered by a band of Snatchers, but also give them a false sense of safety that they must eventually reject. As Ron reminds Harry early on, their cause was never about him alone. A bleak rocky place is a sharp contrast to the world they've known before, a visual image of what could be if they fail. As they put together the pieces of the puzzle of Dumbledore's gifts, they are ready for the last piece of this great saga. 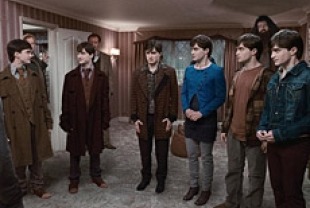 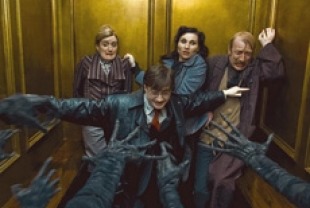 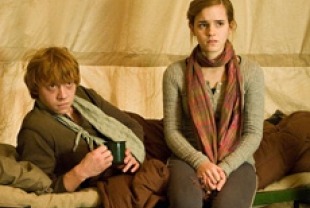 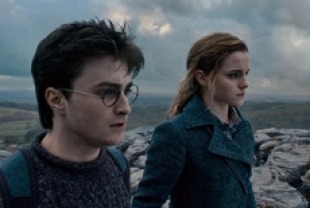