Directed by Ben Affleck
An above-average heist drama that is sweetened by a romance.

Doug (Ben Affleck) is the leader of a gang from Charlestown, a suburb of Boston. His mother left when he was six years old and his father (Chris Cooper) is in prison. With a minimum of confusion, Doug's gang robs a bank in Cambridge and Jim (Jeremy Renner), one of gang's members who has an anger management problem, takes Claire (Rebecca Hall), a bank employee, hostage. He sets her free, but she is badly shaken. When they learn that she lives in the same community as they do, Jim panics and makes plans to get rid of her to prevent the gang from being identified. Doug wants to try another approach.

He meets Claire in a laundromat and slowly begins to build an intimate relationship with her, unbeknownst to any members of the gang. He learns about her love of gardening and her trusting way. When describing the bank robber who kidnapped her, she tells Doug that he had a tattoo. In one of the best scenes in the film, Jim sees them at a restaurant and introduces himself to Claire. Doug worries that both of them will be exposed. But he has much bigger problems to deal with: the crime lord (Pete Postlethwaite) wants him to lead one more robbery and an obsessive FBI agent (Jon Hamm) is on the trail of the gang and desperately wants to end their winning streak at any cost.

The Town is a thrilling heist drama with something to offer besides gun fire and crashing cars — even though there are plenty of both. Ben Affleck as director makes the most of the romance that blooms between Doug and Claire. Her presence in his life leads the bank robber to ask if there is another way of living. Affleck draws out uniformly excellent performances from the cast and comes up with an impressive above-average thriller.

Special features on the DVD include the real people of The Town - Meet the Real People of Charlestown; and "Ben Affleck: Director & Actor" - a profile of the Academy award-winning filmmaker. 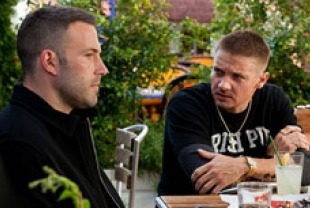 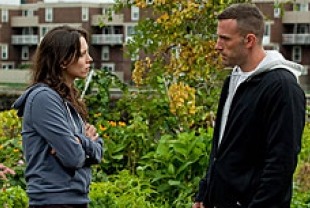 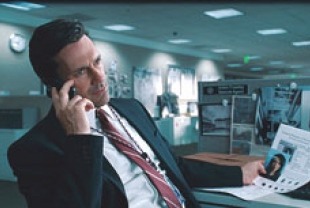 R - strong violence, pervasive language, some sexuality and drug use