Directed by Jim Pasternak
A documentary about the elderly comedian Jonathan Winters and his quest to have his paintings exhibited at the Museum of Modern Art.

Jonathan Winters is an 84-year-old comedian who has been around since the 1950s. He made a name for himself with his improvisations and his mimicking of different speech patterns he invented. Winters is an icon in the world of comedy and that is why such pranksters as Robin Williams, Sarah Silverman, Howie Mandel, Nora Dunn, Tim Conway, Robert Klein, and others agreed to appear in this comedy/mockumentary about Winters directed by Jim Pasternak.

Here Williams shares an unfulfilled dream: to have his paintings displayed in the Museum of Modern Art. The director, who is quite impressed with the comedian's surrealistic paintings, shows them to a vanguard art critic who calls them "the missing link between Miro and Dali." Winters is promised a show at MoMA only if he can paint three new creations.

Everything is proceeding smoothly until the artist's favorite painting is stolen. At one point, Winters admits to being committed to a mental institution years ago. Now, once again, he plunges into depression and claims that a witch doctor took control of him and stole his sense of humor. Winters is unable to paint even through the deadline for the show at MoMA is swiftly approaching.

Certifiably Jonathan reveals the dark side of being a comedian especially one who has experienced both the heights and the depths of fame and glory. Winters keeps us laughing with his quips and sound effects. In two of the funniest sequences in the documentary, Robin Williams takes kids on a tour of Winters' paintings and their meanings. In another, Howie Mandel visits Target with the comedian in order to find his sense of humor.

One thing is very clear: this comedian and painter is a very creative soul. The surprise ending will bring a smile to your face. 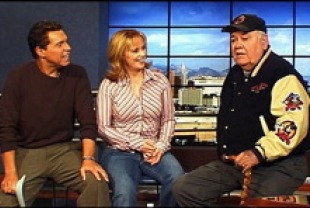 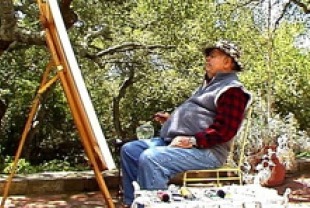