Directed by Michelle Hozer, Peter Raymont
A memorable documentary on the mysterious life and creative spirit of the Canadian pianist Glenn Gould.

Almost everyone who had the privilege of hearing the Canadian pianist Glenn Gould perform was enthralled by his genius. His landmark interpretation of The Goldberg Variations stunned people and left them singing his praises. Gould also elicited plenty of gossip as a celebrity with his own special set of eccentricities such as a low chair, onstage humming, and the habit of protecting his hands by wearing gloves. Although we loved every minute of Francois Girard's Thirty Two Short Films about Glenn Gould (1993), that doesn't mean we can't enjoy this documentary as well. It seems that the mysteries surrounding this pianist and writer will keep filmmakers busy for a long time.

Michelle Hozer and Peter Raymont present a straightforward look at Gould's short but productive life from 1932 to 1982. They make the most of pictures, interviews, and footage of his concerts. They spend some time on Gould's wildly successful 1957 tour of the Soviet Union, his tiff with Leonard Bernstein at Carnegie Hall, and his retirement in 1964 from performing in public. This musician believed that the recording studio was the perfect place to nurture great performances. Gould's imagination was also at work in audio-visual essays like "The Idea of North," which is covered in this documentary.

As might be expected of such an idiosyncratic perfectionist, he experienced a rocky road in relationships. The filmmakers interview ex-lover Cornelia Foss who left her husband to be with Gould. They also note the pianist's crush on "Downtown" singer Petula Clark, who was the focus of a radio program he created. In the end, Gould's bad habits and addictions caught up with him and he died at the age of 50. But like others like rock star Jim Morrison who died too soon, his light shines brightly for all those who savor the purity and exaltation of classical music well-performed.

Special features on the DVD include deleted scenes and extra interviews. 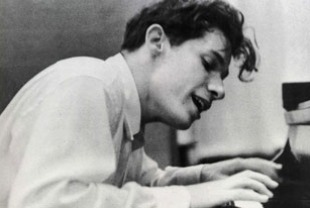