Directed by Zhang Yimou
An inspiring tale of a thirteen year old teacher that shows the link between courage and compassion.

Zhang Yimou has already demonstrated his dramatic flair and exquisite eye for captivating imagery in Ju Dou and Raise the Red Lantern. This time out he has come up with a story of such charm and universality that it just might become a classic. Here a stubborn girl shows her compassion and true grit in a situation where she must shoulder adult responsibilities.

When Gao, the teacher in a small rural school, is forced to leave his position for a month in order to look after his ailing mother, the mayor chooses Wei Minzhi as a substitute. Only 13, she has no teacher training and possesses a mediocre education. But what this girl lacks in skills she more than makes up for with her iron willpower. Teacher Gao tells her that she must not allow even one more student to drop out. At the beginning of the year there were 40 students. Now there are 28. If she keeps all of the class, Gao promises to pay her a bonus.

After several disciplinary problems with eleven-year-old Zhang Huike, Wei Minzhi learns that he has been sent to the city by his invalid mother to earn money. Determined to bring him back, the teacher enlists the help of her other students to come up with some creative ways of earning money for her bus fare. When she finally makes it to the city, she learns that Zhang Huike is not at the place of work and probably is living by his wits on the street. The young teacher must rely on the kindness of strangers for help in finding him. The most resistance comes from a legalistic receptionist at a TV station who won't let her see the manager since she doesn't have any ID or letter of recommendation.

Not One Less illustrates the link between courage and compassion. Once Wei Minzhi decides to fulfill her mission of mercy, nothing will stop her. The drama provides a parabolic enactment of the truth Buddhist teacher Chogyam Trungpa Rinpoche was getting at when he said, "Real fearlessness is the product of our tenderness. It comes from letting the world tickle your raw and beautiful heart." 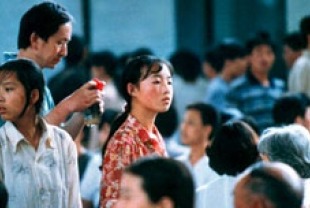