Directed by Paul Feig
A hilarious comedy with a sensational performance by Kristen Wiig as a woman stressing out during preparations for her best friend's wedding.

A Chinese proverb states: "When friends are together, even water is sweet." That is the way it is with Annie (Kristin Wiig) and Lillian (Maya Rudolph) who live in Milwaukee, Wisconsin, and have known each other since childhood. They share all their experiences and dreams with each other. The wonderful world of friendship gives them a sense of being cherished.

Lillian has a boyfriend who surprises her with a proposal of marriage, and she accepts. Annie is immediately transported into a state of shock in the apartment she shares with an oddball British brother and sister (Matt Lucas and Rebel Wilson). The ground has shifted out from under her. Her spirits are uplifted a bit when Lillian asks her to serve as her maid of honor.

Meanwhile, Annie's life in Milwaukee seems to be falling apart on both the dating and work fronts. She recently lost a bakery she started and now works at a jewelry store where her boss is giving her a hard time. Annie is seeing a self-absorbed womanizer (Jon Hamm) who treats her shabbily. And her mother (the late Jill Clayburgh) offers moral support to no avail.

Little does Annie know that Lillian's wedding will test her character and change her forever. The challenge begins when she meets Helen (Rose Byrne), a rich and drop-dead gorgeous woman who is jealous that Lillian chose Annie as her maid of honor. These two are courteous at the outset but soon engaged in a fierce competition. Other members of the wedding party include Lillian's future sister-in-law (Melissa McCarthy) a foul-mouthed and sexually aggressive woman who revels in pleasures of all kinds, a dissatisfied mother of three (Wendi McLendon-Covey) and a newlywed (Ellie Kemper) who went to Disneyland on her honeymoon.

Bridesmaids is the most hilarious comedy of the year with its focus on the rites and rituals that women go though as part of the improvisational community that gathers for a wedding. The film is directed by Paul Feig who makes the most of the many very funny incidents and one-liners in the story. We were caught up in riotous laughter again and again.

Kristen Wiig gives a stunningly agile, appealing, and vulnerable performance as Annie, a thirty-something who hits bottom during the wedding preparations. She is her own worst enemy with such self-destructive habits as comparisons, competitiveness, a belief in bluntly telling the truth no matter what the circumstances, and a lot of stifled anger. It is quite a lark cheering Annie on when we see her making one mistake after another. But like the friendly and witty cop (Chris O'Dowd) she meets, we wish her well as she struggles to reframe her ideal of friendship and regain her balance.

Special features on the two-disc Blu-ray/DVD Combo include deleted scenes; extended and alternate scenes; a gag reel; Roommates; Cholodecki's; "Made of Honor": behind the scenes of Bridesmaids; Annie vs. Helen; Drunk-o-rama; Annie's blind date with Dave; tennis pep talk; Line-o-rama; Cholodecki's commercial; and a feature commentary with filmmakers and cast. 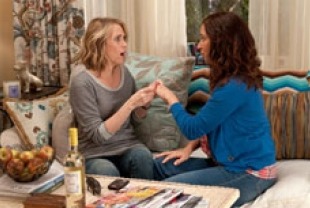 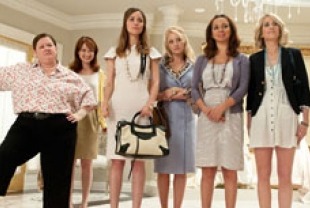 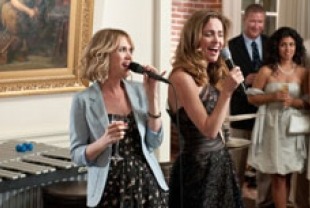 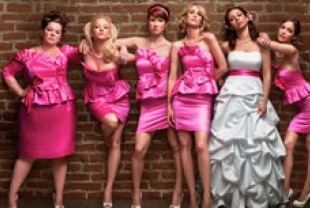 R - some strong sexuality, and language throughout