Directed by George Langworthy, Maryam Henein
A cogent documentary exploring the global disappearance of honeybees who play such a crucial role in our ecosystem.

All over the world, honeybees have been mysteriously vanishing from their hives. George Langworthy and Maryam Henein direct this cogent documentary which seeks to find out what is happening to these insects who play such a crucial role in sustaining our ecosystem. They pollinate nearly one-third of our food supply. Ellen Page serves as narrator, and the film's score includes music by independent artist Brian McBride.

Leading the way in the fight to save the honeybees are commercial beekeepers David Hackenberg and Dave Mendes who have spent three years trying to solve the mystery surrounding the disappearance of these productive and hard-working creatures. Scientists have a list of factors which could be causing what they now call "Colony Collapse Disorder" but are hesitant to point their finger at one reason or another. Hackenberg and Mendes travel to France and talk with beekeepers and others who have dealt with the same problems they are having back home in 35 states. There are interviews with other commercial beekeepers as well with organic beekeepers who are concerned about losing their vocation. One man was forced to close down his operation that had been in his family for five generations.

Honeybees in ancient Europe were seen as healers and held in high esteem. Today, they are considered to be similar to the canary in a coalmine that warns when the air become unbreathable; the honeybees are signaling that something is very wrong with our environment.

Hackenberg and Mendes spend some time in Washington, D.C., where they are disturbed to discover the terrible job the Environmental Protection Agency is doing to regulate the toxic chemicals used to spray plants and crop fields all across the country. In Europe, several nations have banned certain chemicals while they do further study on their safety. In the United States, huge companies like Bayer wield tremendous power and have been able to block similar legislation. Hackenberg and Mendes worry about the toxic residue of these chemicals and the interactions with other compounds which may be responsible for the disappearance of the honeybees. The filmmakers end with a sequence on the widespread efforts of ordinary people to save the honeybees. More information can be found at the film's website www.vanishingbees.com.

Special features on the DVD include two features, "Honeybee Rescue" on how to remove a bee colony from your property without harming the bees and a brief history of "Beekeeping in France", as well as an animated short film about the disappearance of honeybees called "Colony Collapse Disorder (An Unfinished Story)." 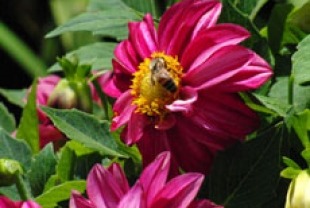 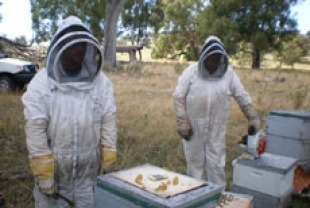