Directed by Lisa Leeman
A documentary that turns into a complex and compelling meditation on interspecies relationships; one of the Best Films of 2011.

Elephants are the largest terrestrial mammals living today. Gigantic and strong, they are able to move with agility and perform many different functions with their trunks such as smelling, feeling, greeting, bathing, and fighting. Three other qualities make them outstanding creatures: their considerable intelligence, their extraordinary memory, and their delight in living in herds with other elephants.

You will grow to love elephants more than ever after watching this deeply moving and enlightening documentary about the friendship between Flora the Circus Elephant and ringmaster David Balding who adopted the two-year-old African orphan and has been on a compelling journey with her ever since. He raised her and trained her to be the star of his show. Then after many years of performing under the big tent in St. Louis, Flora seems to be tired of her routines and is somewhat restless. David is very attuned to her moods and movements and so it hits him that it is time for her to retire. Most important, she needs to be with other elephants.

But where can he go with this 18-year-old ten-thousand-pound friend and companion? David is thrilled when he learns that a safari camp in Botswana, Africa, will take her and she will give rides to tourists. But when that deal falls through, he finds a temporary home for her in the Miami Metro zoo. Once David leaves her there, she feels abandoned and acts out in violet ways. Finally, Carol Buckley who runs The Elephant Sanctuary agrees to give Flora a new home.

Ten years in the making, One Lucky Elephant is brilliantly directed by Lisa Leeman who empathizes with David's great and abiding love for Flora, whom he sees as his "surrogate daughter." Carol Buckley takes seriously the sudden and unpredictable violence of elephants who were orphaned as children or who have spent most of their lives in confining zoo pens or circus rings. When Flora starts smashing fences down and hurts a trainer at The Elephant Sanctuary, Buckley calls upon an expert who claims that she suffers from post-traumatic stress disorder dating back to when her mother was killed in Africa. David is told that she also feels abandoned by him and she will recover better if he does not visit her; he disagrees but has given her to Carol and so has no choice but to stay away.

Because both sides have Flora's best interests at heart, it is easy to swing back and forth between both of their positions as they ruminate about what is going on in Flora's life and emotions. David reveals himself to be a loving friend to Flora who can learn the spiritual lesson she is teaching him: sometimes letting go is the best thing we can do for those we cherish.

Director Lisa Leeman offers her own perspective on this story:

"Watching David trying to find the best home for Flora was to see, finally, that she's caught between two worlds, and belongs fully to neither. She was raised among humans, but they cannot fulfill her deepest needs; she needs to be with elephants, but she hasn't learned how to integrate with her own kind. She's a fish out of cold water: whether with humans or with other elephants."

Whether you take this documentary as a fish out of cold water story or as a complex and thought-provoking meditation on inter-species relationships, One Lucky Elephant is one of the Most Spiritually Literate Films of 2011. 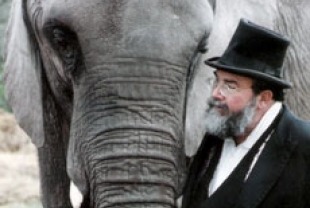 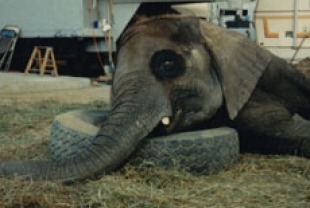 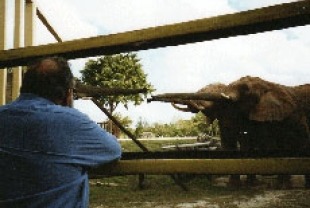