Directed by Peter Wiedensmith
A vibrant and timely documentary about a progressive Unitarian Universalist minister and the challenges she faces in her public and private lives.

1.) Trying to Say Something Meaningful as a Preacher

"I stand here and look at this tree, that tree, these huge big-leaf maples. And I see the sun coming up, and, of course, I'm always frightened because it's Sunday morning and I have to speak to a thousand people and I have to try to say something meaningful. I guess this is part of my morning prayer, that I can say something useful."

These are the meditative words of Marilyn Sewell, senior minister of the First Unitarian Church of Portland, one of the largest congregations in this tradition. Raw Faith presents an incredibly intimate and soul-stirring portrait of this gifted minister over a transitional two-year period as she struggles to deal with her imminent retirement after serving this church for 17 years. It was shot by director Peter Wiedensmith over an 18-month period.

As we watched Sewell preaching sermons from the pulpit, we realized what a gifted speaker she is thanks to her creativity, honesty, and ability to share her experiences rather than confine herself to Biblical explication or discussions of dogma. In this spirit, she is able to convey to the congregation her humanity and vulnerability: as the director pans the faces of those listening, one can see that she is connecting with them emotionally. She describes the experience from her point of view: "I love them for being so beautifully human and walking this road with me." Listening to her narrative sermons, punctuated by personal anecdotes and true confessions, it becomes clear why this Unitarian church grew from 625 to 1600 members under her leadership.

"Spirituality has too long been an almost exclusively male realm, resting in abstract principle and institutional order. In contrast, women tend towards a relational sacrality that is based on the natural world of earth and flesh. The woman's perspective is healing and life-giving, one that we an ill afford to ignore," Marilyn Sewell wrote in the preface as the editor of Cries of the Spirit: A Celebration of Women's Spirituality, a collection of more than 300 poems and a few prose pieces ranging from Hildegard of Bingen to Marge Piercy.

Prior to her ministry in Portland, Sewell accrued a varied educational background: a BA in English education and speech; an MA in English literature; an MA in social work; an MA of divinity; and a Ph.D. in theology and the arts. Sewell then served as an interim pastor of First Unitarian Church in Cincinnati.

In order to go to seminary, she had to leave her two sons in the care of their father whom she had divorced. In the documentary, Sewell admits that it was "the hardest thing I've ever done." Her sons, now grown men, appear to have weathered the storm and are happy about the success their mother has achieved over the years. Not only a formidable preacher, Sewell has brought a female perspective to some of the major social and political issues of the day. In both, she is not ashamed or afraid to express deep emotions based on her relational spirituality. Plus, we got goose bumps watching Sewell do her morning exercise routine to the wonderful music of "Joy to the World" by Three Dog Night.

"If we live long enough in this world, we will have our hearts broken. Do they heal? Well, maybe not fully, completely, ever. But in the cracked and broken pieces, that's where the light shines through. We walk in the world forever after with more depth, more sensitivity, more compassion. Our love affair with the world begins with a broken heart," Sewell says in a sermon.

This accomplished minister carries around painful memories of a dysfunctional family and a scary past. When Sewell was only nine years old, her father abruptly took her and her two siblings to live with his parents. She is haunted by thoughts of what her mentally ill mother must have felt to come home one day and find her children gone. Sewell has tried to forgive her alcoholic father for what he did and in the documentary she even makes a trip to her hometown in order to let go of the shame she felt in the past for her family's history. But this trauma stays with her as a broken heart.

Sewell regularly sees a spiritual director as she tries to handle her difficult transition from an active parish ministry to retirement. Naturally a shy person, she doesn't share with many people her feelings of extreme loneliness and the yearning to experience the intimacy of true love. As she tries to discern what steps to take into the future, a miracle happens; she falls in love with George Crandall, a widower and architect. In a video journal, Sewell comments:

"This is the sort of thing that happens in B movies, in fairy tales. Of course, I knew that. But I have to tell you, dear journal, it happened that way for me. A gift from seemingly nowhere, that I didn't ask for or think I could ever, ever have, just appearing and changing everything in an instant."

Sewell knows that a good man is hard to find when you are in your late sixties. Why did it finally happen? She reflects on this question and realizes that having been married to the church for so long, she finally made a space for it. The filmmaker enables us to savor some of the moments of their unfolding relationship as they try to adjust to each other and the habits they have established. Sewell's love affair with the world is intensified and amplified by her love affair with George.

4.) The Riches and Bounties of Unitarian Universalism

In A Chosen Faith: An Introduction to Unitarian Universalism,, the late Forrest Church and John A. Buehrens note that "deeds not creeds" are emphasized on this path. Here is a religious community in which "individuals are never asked to check their minds at the church door, but in which they offer one another the possibility of rediscovering an authentic and personal spirituality."

For the last 30 years, the media, journalists, and pundits have focused the attention of the American public on the views, fights, and beliefs of the Religious Right and basically ignored progressive religion. Fundamentalists and evangelicals have solidified their power and influence to such a wide extent that they are now producing feature films of their own and co-opting all the publicity for such franchises as the Narnia series.

So hats off to director Peter Wiedensmith and executive producers Scott and Ashley MacEachern for creating this extremely important documentary about a progressive Unitarian minister who has made such a big difference in the lives of her congregation and community. And profound gratitude to Marilyn Sewell for revealing in such an emotionally honest way the vulnerability, loneliness, and yearning for a loving relationship that a minister can feel even in the midst of a strong and supportive community. We were immensely pleased to travel with this gifted preacher and teacher on her richly developed spiritual journey. And we look forward with eager anticipation to the upcoming release of her spiritual memoir.

Special features on the DVD include additional interviews with Sewell about how the church expanded after she declared it a hate-free zone during voter consideration of an anti-gay initiative; and two deleted scenes: Sewell in Washington, DC wishing that politicians could pay more attention to what matters in being more human and loving and Sewell talking about declaring a hate-free society. 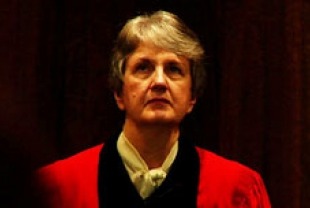 Cries of the Spirit: A Celebration of Women's Spirituality

Claiming the Spirit Within: A Sourcebook of Women's Poetry