Directed by Michelangelo Frammartino
A quiet, meditative, and spiritual Italian film about the transmigration of the soul.

Le Quattro Volte (the title can be interpreted as "Four Times") is a quiet, meditative, and spiritual Italian film with no dialogue and plenty of lingering shots of the natural world, animals, and the human community. An elderly shepherd (Giuseppe Fuda) is a very sick and frail man who must rest while he watches over his herd of goats. The only medicine he uses to treat his severe cough is some church dust that he obtains from a woman who sweeps there. His faithful dog tries to alert the villagers that the shepherd needs help but they do heed his barking pleas. They are involved in an Easter procession.

When the old man dies, his goats surround him in the bedroom in a sign of solidarity. He has looked after them for years and now the least they can do is pay their respects. In the real world of business and exchange this would be seen silly and improbable. In the world of mystics, we are all one and the caring response of the goats to the shepherd is as touching as the mourning rites of elephants for each other.

A procession through the streets carries the coffin of the shepherd to his tomb. The moment it is sealed, a baby goat drops from its mother's womb and tries desperately to stand up on its four legs. The story of life switches from that of the human world to the animal realm of the young goat who is frisky and immensely curious about everything. What a lark to see him playing "King on the Mountain" with other young ones. But in his first adventure out into the wider world, he gets lost and bleats out in agony and bewilderment. At nightfall, he sits down by a tree and the story shifts once again.

A giant fir tree which has enjoyed the pleasures of sun and wind loses them both when it is cut down by the people of the rural Italian community. It has been designated for use in a village pole-climbing rite. Now the story shifts once again to the coal which has a major role to play in a traditional coal-making mound where it is used as fuel.

We realize that Frammartino has taken us on a journey of the transmigration of the soul from human to animal to vegetable and finally to mineral. It's the same series of connections that Rumi mentions in a poem:

"We began as a mineral. We emerged into plant life
and into the animal state. Then into being human,
and always we have forgotten our former states,
except in early spring when we almost
remember being green again."

Viewing this strange and wonder inducing film we bump up against the spiritual qualities of reverence and mystery. Rebirth is an awesome thing and when we experience it or ponder it afresh we are taken aback by the idea that humans are one in unity with animals, vegetables, and minerals.

Le Quattro Volte is the second film released this year in DVD on reincarnation: the first was the Thai film Uncle Boonmee Who Can Recall His Past Lives. The times are a changin' as far as foreign language films are concerned. 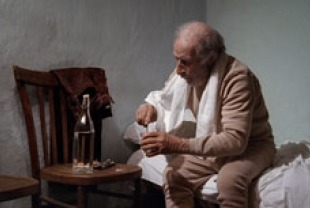 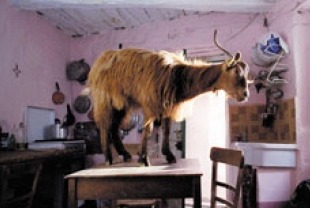 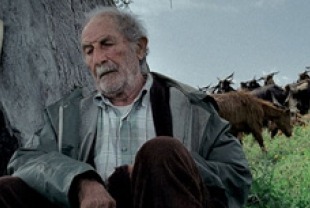