Directed by Bennett Miller
A thinking person's sports flick about the impact of the maverick Oakland Athletics General Manager on the game of baseball.

As a young man, Billy Beane (Reed Thompson) was saluted by scouts as the near-perfect baseball player with skills in five different areas. He made a decision to give up a scholarship to Stanford and sign with the New York Mets right out of high school. But after a brief flurry of success, Billy failed to live up to everybody's high expectations. Instead of leaving baseball, he switched to the management side and worked his way up to become the General Manager of the Oakland Athletics.

Following the defeat of his team to the New York Yankees in the 2001 playoffs, Billy (Brad Pitt) sees three of his top players leave for more money elsewhere. He faces the almost insurmountable task of rebuilding the team on a ridiculously small budget. Meanwhile, the rich teams like the New York Yankees and the Boston Red Sox can buy all the best players and keep winning game after game, year after year.

Billy's scouts only seem to have tried and tired ideas for finding new players, selecting them on their body strengths and weakness, their personal looks, and how they behave off the field. Then he meets Peter Brand (Jonah Hill), a Yale graduate in economics who has a new method for identifying the best prospects for a team, using statistics such as a player's OPS, on-base plus slugging average. By targeting players who meet these criteria but have been undervalued through the old system, Billy can assemble a team on his limited budget. He immediately hires Peter, much to the dismay of his scouting coach director Grady Fuson (Ken Medlock). Billy and Peter make an oddball couple who are put to the test in the 2002 season. In addition to the challenge of making this new system work and refining its elements, they have to deal with the feistiness of manager Art Howe (Philip Seymour Hoffman) who is upset about his meager one-year contract.

These two innovators take such a big gamble on their bold attempt to change the way players are chosen that it is hard not to cheer for them as underdogs. But the maverick Oakland Athletics GM is not a very likeable person with his mood swings, his cold technique for trading and letting players go, or his habit of not watching his team play their games. In scenes with his teenage daughter (Kerris Dorsey), Billy loosens up a little bit. Jonah Hill as Peter Brand nearly steals the movie with his sympathetic portrait of a young man who clearly cares about the game and the people in it.

The film makes it clear that Billie wasn't that interested in getting rich. Even when his team has an unprecedented winning streak, he contends that only the last game of the season counts. What he wants is to change the game that has become moneyball rather than baseball. What happened, of course, is that his revolutionary way of constructing a team was adapted by the richest organizations. So nothing really changed: over and over the wealthy and the powerful just absorb the best ideas as well as the best players and keep on winning. 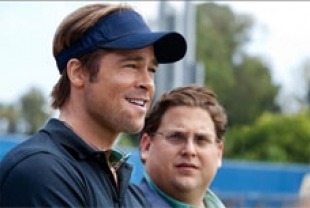 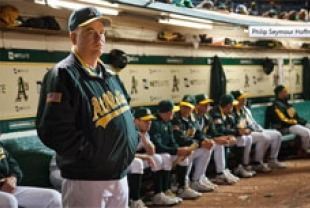 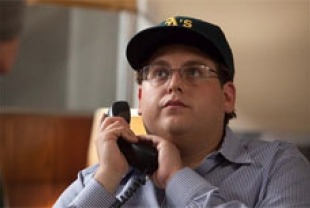