Directed by Annie J. Howell, Lisa Robinson
An intimate and well-acted drama about the technological tools in our lives and the quest of a young pregnant woman to reconcile with her long estranged mother.

The technological tools we are using are changing our perceptions of intimacy and solitude. More and more people are finding themselves enmeshed with digital technology from personal computers to iPhones, Blackberries, Facebook, Twitter, MySpace, and Skype. In her book, Alone Together: Why We Expect More From Technology and Less from Each Other, Sherry Turkle writes: "We're using inanimate objects to convince ourselves that even when we're alone, we feel together. And then when we're with each other, we put ourselves in situations where we feel alone — constantly on our mobile devices. It's what I call a perfect storm of confusion about what is important in our human connections."

Small, Beautifully Moving Parts is a thought-provoking drama about a young pregnant woman who goes on a quest to find some answers about her life. One of her major interests is the love/hate men and women have toward the digital devices that take up such a large part of their time and attention. In a series of interviews, she sees the ambivalence people have toward the Internet age.

Sarah Sparks (Anna Margaret Hollyman) is a freelance technologist who lives in New York City with her lover (Andre Holland). When she learns that she is pregnant, she initially responds with praise for the tool that has given her the information that she is going to have a baby. Soon afterwards, Sarah experiences a batch of mixed feelings about this major shift in her life and work. Her sister (Sarah Rafferty) insists that she come to Los Angeles for a proper baby shower with all of her friends who are young moms. But Sarah flees the party, overwhelmed by feelings of doubt that she is qualified to be a mother. What she really wants is to see her mother (Mary Beth Peil) who abandoned the family years ago and hasn't stayed in touch.

On her quest to be reconciled with her mother and to get her advice, Sarah stops for a short visit with Towie (Susan Kelechi Watson), her lover's sister who is a masseuse working in Las Vegas. She gives her some far-out information about the baby in her womb. Sarah continues on for a brief get-together with her father (Richard Hoag) who is having an intense romantic relationship with a woman in another country via Skype. Naturally, he wants to solve a technology problem, and she accommodates him.

Small, Beautifully Moving Parts has been written and directed by Lisa Robinson and Annie J. Howell. It's a rounded and realistic portrait of Sarah's quest to see her mother and to answer some questions that have been troubling her. Anna Margaret Hollman gives a nuanced performance that touches all the right emotional bases in her character's difficult transitional journey. Best of all, the screenplay delves into the complicated relationships we have with the technological tools in our lives which promise more connections with others but often serve only to isolate us. 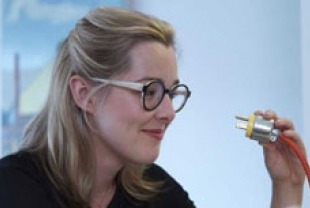 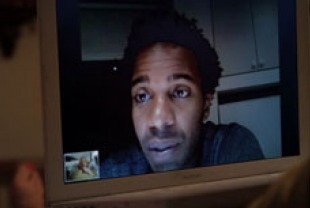 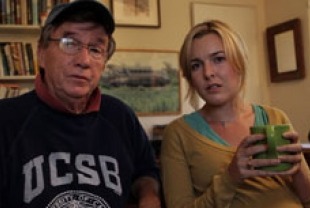 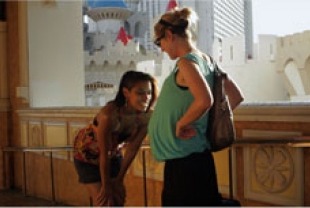