The Wind Will Carry Us

Directed by Abbas Kiarostami
A lyrical film that reminds us that the mysteries of life and death cannot be controlled or manipulated.

In a 1995 speech distributed in Paris, Iranian filmmaker Abbas Kiarostami observed: "It is a fact that films without a story are not very popular with audiences, yet a story also requires gaps, empty spaces like in a crossword puzzle, voids that it is up to the audience to fill in. Or, like a private detective in a thriller to discover. I believe in a type of cinema that gives greater possibilities and time to its audience. A half-created cinema, an unfinished cinema that attains completion through the creative spirit of the audience, so resulting in hundreds of films. It belongs to the members of the audience and corresponds to their own world."

In the beautifully photographed The Wind Will Carry Us, a filmmaker and two colleagues from Teheran are driving in a Land Rover to a remote mountainside village in Iranian Kurdistan. They are met by a boy who becomes their guide. Although the filmmakers have really come to document a folk ritual following the imminent death of an elderly woman, they want everyone to think they are engineers. Subterfuge comes easily to urban dwellers.

While the men of the village are off working in the fields, the filmmaker meets several women including a feisty tea shop lady, a pregnant woman who gives birth to her tenth child, and a 16-year-old girl who milks a cow in a cavern for him while he recites a poem for her. Day by day the outsider gets a health update on the invalid from the resourceful boy. Meanwhile, his colleagues try to stave off their boredom by jaunts to the countryside for fresh strawberries.

The death watch turns into a two-week wait and the filmmaker grows increasingly restless. Repeatedly receiving calls from the city, he must drive to higher ground in the cemetery to get good reception on his cell phone. It is a telling metaphor for the enslavement of people these days to this insidious piece of technology. The need to always be "on top of things" distracts him from the quiet beauty of the area and the blessings regularly bestowed on him by the pious villagers who treat him as an honored guest.

At one point, the filmmaker comes upon a man digging a ditch near the cemetery for a telecommunications project. Although he never sees the fellow (just as we never see the filmmaker's colleagues or the dying woman), he carries on several conversations with him. When a cave-in buries the fellow underground, the filmmaker rushes to alert men in the fields to come and rescue him. He then meets an elderly doctor who uses his free time to marvel at the wonders of the natural world. In a magic moment, they recite a poem they both remember.

Still, all the waiting wears on the filmmaker. When the invalid takes a turn for the better, he lashes out at the boy who has been his patient and loyal friend. Up at the cemetery, upset that things are going so slowly, he kicks a turtle over on its back. Later, near the same spot, he watches in amusement as a beetle tries to move a hunk of dung three times its size. Writer and director Abbas Kiarostami keeps reminding us that the mysteries of life and death cannot be controlled or manipulated. And rarely do things work out according to our expectations.

The stunning images amid the mundane events in this lyrical drama enable us to appreciate in a reverent and meaningful way the preciousness of being truly present in this enchanting world. Francis Bacon has written, "The job of the artist is always to deepen the mystery." Yes. Kiarostami has done that and much more by opening up his film story and letting us linger with all its images of people, place, and spacious time. 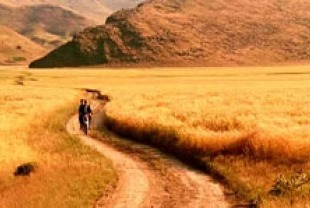