Directed by Rodger Michell
A fact-based story of a courageous and flinty housewife who tries to become a peacemaker in Northern Ireland.

Bernie McPhelimy (Julie Walters), her husband Aidan (Ciaran Hinds), and four children move into the Andersontown district of Catholic Belfast, Northern Ireland, in 1972. They hope to be able to raise their children in a peaceful place. On their first night in the new home, however, they look out the window and see an IRA gunman shooting at British Army soldiers. Bernie, not one to stand idly by when her family is threatened, condemns the violence.

There is no rest for those who live in a neighborhood under siege. A British soldier is badly wounded, homes are searched, and men are taken away for questioning. But the incident that turns Bernie into an activist for peace is when a close friend of hers, a beautician, is shot and killed while walking across the street in broad daylight with Bernie's son.

Titanic Town pays tribute to the courage and conviction of a housewife who takes it upon her shoulders to bring peace to her neighborhood. Rodger Michell directs this hard-hitting and well-acted drama based on Mary Costello's autobiographical novel.

The feisty and indomitable Bernie is like a bulldozer when her passions are aroused. But her criticism of IRA violence earns the ire of many of her neighbors who view her as a traitor to the cause. Her crusade is especially hard on her 16-year-old daughter Annie (Nuala O'Neill), whose search for independence leads to a relationship with Dino (Ciaran McMenamin), a medical student. Meanwhile at school, Bernie's sons are bullied and rejected by their classmates.

Being a peacemaker means expressing anger while seeking to be compassionate. Bernie and her co-campaigner Deirdre (Aingeal Grehan) meet with representatives of the IRA and then with the British Secretary of State for Northern Ireland. This sets in motion a petition for a ceasefire in Belfast. However, she is attacked on the streets by two men who threaten to kill her and her family. Later, a pro-IRA crowd gathers in front of her home and violence erupts.

Titanic Town vividly conveys the complexity of "The Troubles" in Northern Ireland and the bravery of one woman who tries to make a stand for peace. In a second and equally affecting theme, we see how zealots can slight the ones they love due to the single-mindedness of their commitments. The ending of the film brings to mind what a pacifist told Dorothee Soelle: "The people who worked to build the cathedrals in the Middle Ages never saw them completed . . . You must imagine peace the same way." 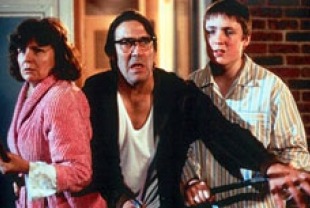