Directed by Laurent Cantet
A stunning French film about the varied ways in which soul is savaged and then brought to life again in the workplace.

Frank (Jalil Lespert), who is studying business in Paris, has a new job as a trainee in the factory where his father (Jean-Claude Vallod) has worked for 30 years. His married sister (Veronique de Pandelaere) also is employed at the metalwork plant. It is obvious from the outset that this young man is the apple of his parents' eyes, and they have invested a lot of time, energy, and money into his education.

On Frank's first tour of the factory, his father shows him the machine he works on and proudly notes that on a good day he can punch 700 parts an hour. The old man is glad to see that his son has made a good impression on the boss (Lucien Longueville), a shrewd man who wants to make the most out of the new employee's youthful energy and enthusiasm.

Frank's assignment is to work on the factory's imminent changeover to a 35-hour work week. When the workers' union representatives resist some of management's plans, Frank recalls a situation he studied in school when a company went directly to the workers for their opinions. Madame Arnoux (Danielle Melador), the charismatic and feisty union leader, immediately senses that this newcomer and his referendum spell trouble for the workers. Meanwhile Frank's membership on the management team isolates him from his old friends who feel he's become elitist. Equally disconcerting is the fact that he is excluded from meetings with out-of-town bigwigs.

Human Resources is one of the best films of the year with its riveting portrait of how difficult it is to keep your soul alive in the workplace. With an intensity of focus rarely seen in American movies, this French drama directed by Laurent Cantet and co-written with Gilles Marchand shows what happens when companies disregard the souls of their employees and ask them to sacrifice all on the corporate altar.

When Frank discovers that his referendum is being used by management to justify laying off more workers — including his own father — he decides to fight back on the side of the union. Along with Alain, another machine worker (Didier Emile-Woldemard), Frank pulls off a bit of industrial espionage to get a crucial bit of information needed by the union for a case against the boss.

The emotional hub of Human Resources is the ensuing clash between Frank and his father over the nature and meaning of work. The old man loves his job and doesn't have a clue as to why his son thinks it is important for him to have more leisure time every week. And Frank can't understand why his father doesn't cherish the idea of a less monotonous job and more input from the employees on working conditions.

Human Resources brings to vivid and dramatic light the varied ways in which soul is savaged and then brought to life again in the workplace. Madame Arnoux certainly is a passionate person who stands up for what she believes in and acts forcefully. Despite all that he has to lose, Frank finds the inner courage to speak out against the injustice perpetrated upon the workers. But his heart just isn't big enough for him to reconcile with his father after he publicly proclaims the shame he's felt for years in being the son of a passive working-class stiff.

One of the many marvels surrounding this outstanding French film is that all the actors and actresses, except Jalil Lespert as Frank, are nonprofessionals. It's to director Laurent Cantet's credit that he has not slighted the complexity of bringing soul to life in the much-tarnished world of work. And true to human nature, although Frank wins one battle in the factory, he is left high and dry in his relationship with his father. 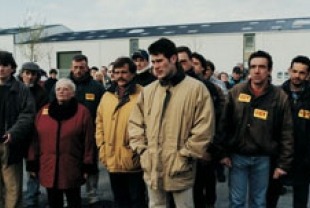