Directed by Robert Zemeckis
Character study about a veteran pilot whose skills in a disaster makes him into a hero but whose alcoholism sets him on a course of self-destruction.

Whip Whitaker (Denzel Washington) is a veteran pilot for a regional Southern airline who is a secret alcoholic. Divorced from his wife and alienated from his son because of his drinking problem, he persists in telling himself that he has it under control and that he can handle it on his own. Typical of his life, he has just spent the night with a young flight attendant (Nadine Velazquez) with whom he shares a love of mixing sex, booze, and drugs. Just before leaving for the airport and his next flight, Whip has some cocaine.

In the cockpit, he greets his co-pilot (Brian Geraghty) and prepares for a trip to Atlanta in the pouring rain. When the bad weather knocks the plane around, causing panic among the passengers, Whip accelerates the jet and breaks through into clear sky.

Exhausted, he falls asleep and then a mechanical breakdown occurs and the plane plunges downward and out of control. It takes Whip's good instincts to come up with a plan that works as he lands the plane in a field.

Of the 96 passengers and six flight attendants, only six people are killed. In the hospital recovering from the ordeal with only minor injuries, Whip suddenly finds himself being celebrated as a hero. Given his large ego, he agrees with this acclaim. But questions soon emerge about the cause of the crash and his actions before and during it.

Robert Zemekis directs this thriller about the spiritual emergency of an addict whose stubborn independence keeps him from giving in to the ministrations of those who desperately want to help him. Among his supporters are Charlie Anderson (Bruce Greenwood), a longtime friend and the pilot's union rep; Nicole (Kelly Reilly), a drug addict who close encounter with death has propelled her into a 12-Step program; and attorney Hugh Lang (Don Cheadle), who has been hired to make sure that Whip does not serve time for criminal negligence. The only one who wants to see him stay in denial is his drugdealer Harley May (John Goodman), a boisterous and colorful character.

The screenplay by John Gatins gives us plenty of insights into Whip's addiction and his propensity for turning aside all those who have his best interests at heart. As he prepares for the all-important hearing he vows to stay sober. His challenge: make it through one day without liquor. His destiny hangs in the balance.

An interesting sidebar observation is the many religious references in Flight. Whip's co-pilot and his wife are born-again Christians, but they surprise us with their response to the crash. The lawyer Lang gets a clause put into the legal papers calling the disaster "an act of God." One of the reasons why so many people survived the crash is because they were rescued by a group of Pentecostal men and women who witnessed the plane tear the steeple off their church.

We agree with Roger Kamenetz who wrote about the Tsunami and concluded that God does not punish people through disasters. Crashes like the one depicted in Flight happen through a combination of technological malfunction, human error, and chance. They are not orchestrated by a vengeful Creator. But miracles do occur when God brings new life and transformed people out of catastrophies.

Special features on the two-disc combo: Blu-ray/DVD include: Origins of Flight; "The Making of Flight"; Anatomy of a Plane Crash; and Q & A Highlights. 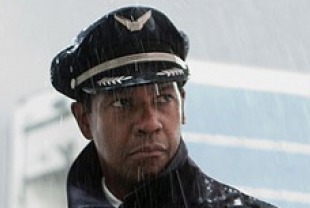