Directed by Andres Wood
A well-acted and well-directed musical biodrama about the life and career of the Chilean singer and songwriter Viola Parra.

Violeta Parra (1917-1967) was a legendary Chilean singer, songwriter, author, poet, and painter. In her spare time, she traveled all over the country gathering folk songs and ballads passed down from singer to singer through the years, initiating a revival in Latin American folk music that became known as nueva cancion. Her talent and persistence as an ethnomusicologist enabled her to become a walking, talking, and singing ambassador for Chilean music. Andres Wood has created a compelling biodrama about this immensely gifted and resilient woman whose songs have been recorded and championed by Joan Baez, Pete Seeger, Wynton Marsalis, Shakira, Buena Vista Social Club, U2, and many other groups and musicians.

Violeta (Francisca Gavilan) was raised by her widowed father (Christian Quevedo), an alcoholic music teacher who taught her how to sing. Following his death, she and her brothers played music on the streets for money. Parra composed her first song when she was 12 years old.

She eventually married and had children despite a vagabond life. While on tour in a Communist country, her youngest daughter died. Parra put her art before everything else and had an unsatisfying affair with the Swiss flutist Gilbert Favre (Thomas Durand). He was absolutely astonished when Parra's folksy paintings were chosen to be put on display at the prestigious Louvre. For a while, it seemed that everything this artist touched turned to gold.

Chilean director Andres Wood draws out a bravura performance from Francisca Gavilan in the lead role. The film is based on Angel Parra's memoirs of his mother. Many of the high and low points in the singer/songwriter's unconventional life are covered in a television interview. Parra spins out of control after her ambitious folk music center fails to attract enough people to stay open. By then, she has spent herself and has no energy left in her body to attempt a late and uphill turn-around in her musical career.

Violeta Went to Heaven stands apart from the countless screen musical biographies, thanks to the creativity and integrity of Wood and Gavilan.

Special features on the DVD include the theatrical trailer; stills gallery. 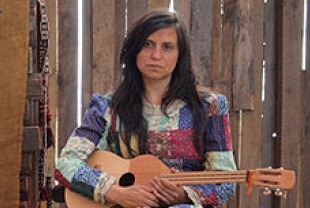 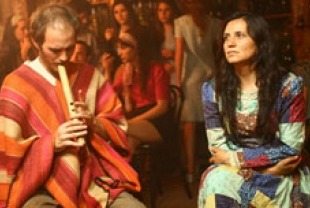 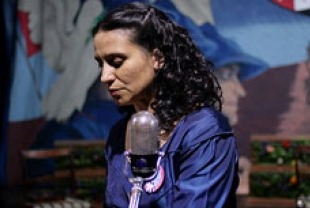