Directed by M. Night Shyamalan
An extraordinary movie which compels us to consider the mystery of our own goodness.

One of the most poignant and popular quotations about spirituality of the last decade could be seen as a comment on the theme of this extraordinary film written and directed by M. Night Shyamalan (The Sixth Sense). Although consistently attributed to Nelson Mandela, who used it in his inaugural address, the quote was actually written by Marianne Williamson in her book Return to Love. Here it is: "Our deepest fear is not that we are inadequate. Our deepest fear is that we are powerful beyond measure. It is our light, not our darkness, that most frightens us. We ask ourselves, who am I to be brilliant, gorgeous, talented, and fabulous? Actually who are you not to be? You are a child of God."

Returning by train from a job interview in New York City, security guard David Dunn (Bruce Willis) slips off his wedding ring when he notices an attractive woman (Leslie Stefanson) is about to sit down next to him. They talk but she is not interested in this rather intense fellow and moves away. Then the train derails, killing 131 passengers except one — David. He escapes completely unharmed. There is no logical explanation for this miracle. At the hospital, he's met by his estranged wife Audrey (Robin Wright Penn) and his adoring son Joseph (Spencer Treat Clark). Later Audrey tells him she thinks they should use this second chance to restore their marriage.

Meanwhile Elijah Price (Samuel J. Jackson) sends him a note with the following question: "How many days of your life have you been sick?" David tries to remember the last time he was ill and finds out that he has never taken a sick day from work. Elijah wants to know more about David, it turns out, because he is afflicted with a rare disease that makes his bones as brittle as glass. He has been in the hospital, on crutches, or in a wheelchair for nearly one-third of his life. He's looking for his own opposite — an unbreakable person.

Elijah owns a high-end store selling original art from comic books, an interest encouraged by his mother (Charlayne Woodard) when he was in school. He becomes convinced that the unbreakable David is also hero material, someone put on Earth to "protect" others. It's not by chance, he suggests, that David chose security as his work.

Although initially put off by Elijah's obsession with superheroes and his high estimation of him, David does reassess things he has not taken very seriously previously — his own remarkable physical strength and vast psychic powers. One of these discoveries leads to a very scary incident involving his son and a gun in the house. Equally unsettling are David's memories of the automobile accident that ended his college football career and the time he almost drowned in a swimming pool. He admits to Elijah that he has woken up sad almost every morning of his life. What is holding him back?

M. Night Shyamalan skillfully weaves a web of suspense into the intricate structure of this film. One of the unique marks of his cinematic style is a slow pace that offers a refreshing change from the frenetic hustle and bustle of so many other thrillers. He also uses unusual camera angles, shooting between the seats in the train or showing a conversation entirely through a reflection in a mirror. The effect is completely mesmerizing.

In Eastern spiritual teachings, there is a saying that everything that has a front has a back. Life is filled with polarities — light and darkness, sorrow and joy, selfishness and generosity. Plenty of movies deal with evil but very few courageously chart the course of its opposite. "The problem of evil has baffled humankind since Eden," D. M. Dooling has written, "perhaps because it can only be approached through facing the mystery of good, and we do not like to acknowledge that good is a mystery."

One of the best films of the year, Unbreakable compels us to consider the mystery of our own goodness. At one point Elijah says, "The saddest thing is not to know your place in the world." Yes, and even more sad is to ignore that which is powerful, exceptional, giving, and loving inside of us. Sometimes, as in this gripping drama with its surprise ending, there is someone out there who helps us see how special we truly are. Within each of us this unique and glorious self awaits awakening. And remember, a great spiritual teacher, Jesus, said to those on the path of discipleship, "greater works than I do, you will do." 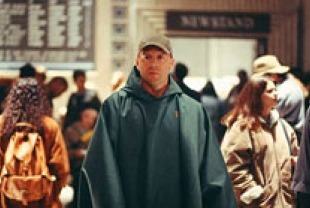