Directed by Ang Lee
A high flying, totally engaging, Chinese language drama containing the most amazing martial arts scenes ever put on film and a spiritual hero to boot!

The versatile and ever imaginative director Ang Lee is known for his Taiwanese trilogy (Pushing Hands, The Wedding Banquet, Eat Drink Man Woman); his lyrical interpretations of Jane Austen's Sense and Sensibility and Rick Moody's Ice Storm; and the civil war drama Ride with the Devil. This rousing Chinese language drama won the Academy Award as Best Foreign Language Film of 2000 and other Oscars for Best Original Score, Best Art Direction, and Best Cinematography. It is a period swashbuckler in the ancient action genre known as wuxia pian or film of martial chivalry. Like the samurai saga in Japan, or the western in the United States, this genre has great mythic power.

Li Mu Bai (Chow Yun Fat, last seen in Anna and the King) is a famous warrior trained in the martial arts who decides to retire to a monastery for a life of meditation. He visits his friend Yu Shu Lien (Michelle Yeoh) who now runs a security agency and entrusts her with his mythic 400-year-old sword, Green Destiny, which is to be given to the venerable Sir Te in Beijing. Of course, the priceless object is stolen. Yu Shu Lien correctly guesses that the culprit is Jen Yu (Zhang Ziyi), the aristocratic daughter of a politician who yearns for a life of adventure. To accomplish this, she has aligned herself with the legendary villainess Jade Fox (Cheng Pei Pei), who among other things is responsible for the death of Li Mu Bai's master. Refusing to take seriously the arranged marriage that has been set up for her, Jen secretly nurtures her love for Lo (Chang Chen), a desert bandit who years ago held her captive.

Crouching Tiger, Hidden Dragon is a high-flying, fast-paced, and totally involving martial arts drama based on the practices of the Wudan style of martial arts, whose adherents draw the strength and power from large reserves of centeredness and personal renunciation. Li Mu Bai is a spiritual hero whose selflessness enables him to keep his word, overcome obstacles, and right various wrongs. Think back and try to recall the last time you saw a hero on the screen who stepped aside to serve others by making himself a zero.

Other elements making Crouching Tiger, Hidden Dragon one of the best films of 2000 are the enchanting musical score by Tan Dun with cello solos by Yo-Yo Ma and the amazing martial arts choreography by Yuen Wo-Ping (The Matrix). These scenes will take your breath away with characters scurrying up the sides of buildings, fleeing across the tops of roofs, and performing leaps in the spirit of Nureyev. The consummate martial arts scene takes place on the swaying branches of trees in a bamboo forest.

A final treat is the stunning cinematography by Peter Pau that includes exquisite Chinese landscapes and the stirring beauty of the Gobi Desert. 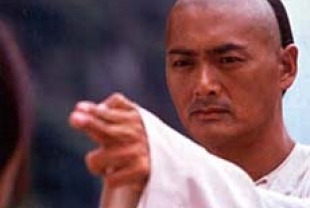