Directed by Richard Ayoade
A dank and dour drama contrasting the woes of a sad sack loser to the triumphs of an ambitious and self-confident winner.

There are many sad souls in the world who just can't win no matter what they do or how hard they try. Simon James (Jesse Eisenberg) has diligently put in his time at a tedious office job and yet his boss Mr. Papadopoulos (Wallace Shawn) doesn't even know his name. He has a crush on Hannah (Mia Wasikowska), a co-worker who lives in the apartment across from him; she has no idea that he regularly spies on her. Even the security guard at the entrance to the office building gives Simon a hard time about his identification when he arrives for work. One would hope that this forlorn and lonely young man would get some love and admiration from members in his family circle. But his aged mother (Phyllis Somerville) treats him shabbily and evidences not a shred of respect for him.

Things go from bad to worse for Simon when James (Jesse Eisenberg) takes a job and immediately earns accolades from his boss. Although they look like twins, they are light years apart in every way. James is a smooth-talking and articulate fellow whereas Simon stutters and mumbles incoherently. James is an accomplished ladies man whereas Simon is shy around women. Everything that James touches turns to gold.

Richard Ayoade is the writer and director of this oddball film which is based on the 1846 Dostoevsky novella The Double and brings to mind Terry Gilliam's Brazil and Orson Wells' adaptation of Franz Kafka's The Trial. The dark and bleak setting for this drama underscores its somber messages about sad souls who can't do anything right and go getters who excel in anything they set out to accomplish. Jesse Eisenberg plays both of these characters and manages to spark our interest in them for a while. But The Double runs out of creative energy in the last section of the movie. 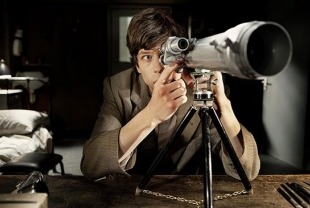 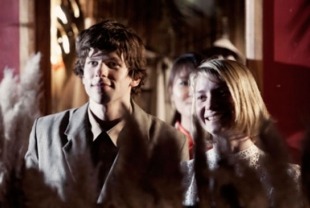 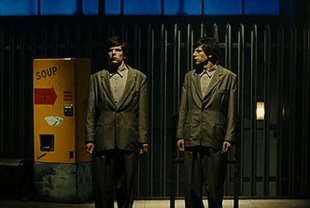 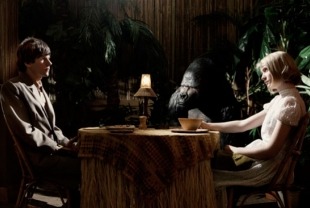