Directed by Ryan McGarry
A sobering and idealistic call for more emergency room "mercy medicine" as an alternative to treating only paying patients.

Here is a bold, thought-provoking, and emotionally riveting documentary that sheds light on the problems of the U.S. medical system. Unlike media reports where reporters talk the subject to death, Code Black introduces us to a dedicated group of young emergency room doctors who give us hope for the future with their commitment, talent, compassion, kindness, and caring for the patients they treat. Every single one of them believes passionately in "mercy medicine" as an alternative to treating only paying patients.

This focused documentary begins by taking us into the ER at Los Angeles Country General Hospital where major trauma patients are being treated by a crowd of doctors and nurses in a 20-square-foot-bay. Young residents feel adrenaline rushes as they work together as a team and give everything they've got to save lives.

But these experiences are now just memories. In 2008 LAC and USC Medical Center moved to a modern facility where doctors and nurses now spend more time doing paperwork and logging data than treating patients. In addition, the structure of the building separates them from patients who now have more privacy but less attention from their care-givers.

With more and more doctors turning away men, women, and children who do not have insurance, emergency rooms are filled with patients who can spend 12 to 18 hours waiting to see a doctor. Most of those who come to this ER are working-class people. The title of the film, Code Black, refers to these inhumane jammed waiting rooms where sick people are intermixed with screaming children, mentally deranged street people, and victims of violence. A handful of zealous residents try to set up a new system for moving patients from the waiting room to a face-to-face session with a doctor but the experiment fails when there aren't enough nurses (many nurses have quit because of poor pay).

Three cheers for the young doctors in Code Black; we hope and pray that they will not burnout or compromise their ardent idealism.

Special features on the DVD include bring your own doc interview with Director Ryan McGarry and Reconnection – a short film by Ryan McGarry. 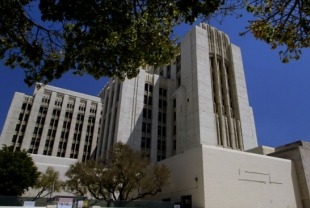 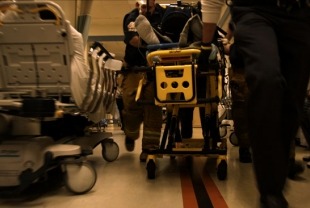 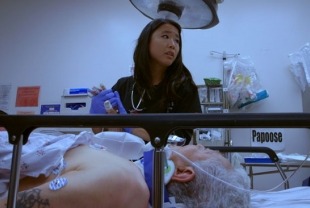 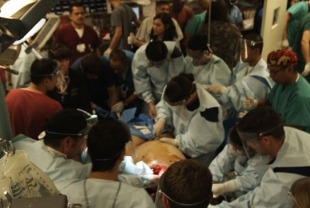