Directed by Chris Williams, Don Hall
A lively and creative animated film about a robot with heart, empathy, compassion, and gentleness.

The word robot was coined in 1921 from the Czech word "robotta" meaning compulsory labor. Since then, we've been treated to a variety of science fiction tales about these technological creations. The growing presence of robots is already changing the labor market. Experts believe that robots will evolve into companions and information bases, similar to C3PO in Star Wars. With their fast silicon brains and their tireless bodies, these intelligent machines will be capable of round-the-clock work, creative thought, and perhaps even independent action.

Big Hero 6 is a freewheeling 3-D animated screen adaptation of a Marvel comic; it is directed by Don Hall and Chris Williams. Set in a futuristic metropolis called San Fransokyo, the story revolves around two brothers who are technological geniuses. Hiro (voiced by Ryan Potter), a teenager, entertains himself by entering his microbot in back-alley battles. His older brother, Tadashi (Daniel Henney), goes to a university and is part of a group of geeks who work together in a special lab. He introduces Hiro to Baymax (Scott Adsit), a plump robot he has designed as a "personal healthcare companion" and programmed for empathy, compassion, and kindness.

When Tadashi dies in an accident at the lab, Hiro is overwhelmed by grief. Baymax (Scott Adsit) senses his mood and searches his database to come up with ways to support someone who is grieving. For example, he summons Tadashi's friends because "those who suffer a loss need the support of friends." They are GoGo (Jamie Chung), Wasabi (Damon Wayans Jr.), Honey Lemon (Genesis Rodriguez), and Fred (T. J. Miller).

After discovering that there is some foul play connected with his brother's death, Hiro decides to get revenge. He armors Baymax and teaches him karate. Soon the other geeks are equipped to do battle as well.

The screenwriters Daniel Gerson, Robert L. Baird and Jordan Roberts have created an awesome hero in Baymax whose simple two black eyes connected by a smiling mouth are external examples of his inward cheerfulness and good-naturedness. This gentle giant proves himself to be a great helpmate for Hiro, who really does need someone to watch over him. In a surprise that left us cheering, Baymax is willing to do almost anything that improves the boy's health and well-being but is unwilling to serve as a tool of revenge and the destruction of a human being.

In the future, human beings are going to have more interaction with robots, and it seems wise to program them to be calm, polite, and empathetic. Baymax evidences the same kindness as the robot played by Robin Williams in Bicentennial Man whose mantra is "glad to be of service." We love these portraits of nice robots!

Special features on the Blu-Ray/DVD include "Feast", a theatrical short. 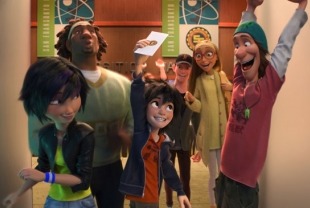 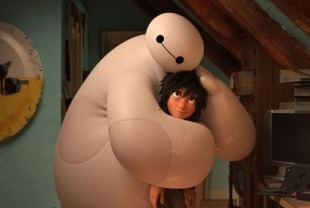 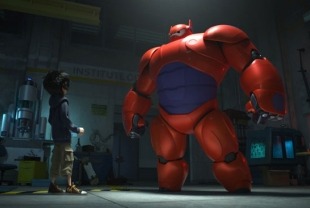 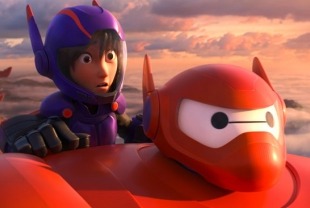