Directed by Jill D'Agnenica
Touching story of mother and her son who discover that music is a healing balm.

They say that there are great energies and similarities in the angst of teenagers who can't put their fingers on what they really want and middle-agers who are often compelled by circumstances beyond their control to take stock of their lives. This crisis point shared across the generations is beautifully illustrated in Life Inside Out, an independent drama that was funded by a successful Kickstarter campaign.

Laura (Maggie Baird) is a 46-year-old mother of three sons. Her youngest, 14-year-old Shane (Finneas O'Connell), has dropped off the soccer team without telling his parents. His hard-working father Mike (David Cowgill) is feeling the financial pinch and has suggested that Laura get a job. She was the apple of her mother's eye and received encouragement from her when she became an aspiring singer/songwriter during her adolescent years. But when her mother died, Laura put away her guitar.

Sensing that music is truly the passion of her life, this middle-ager gets her guitar repaired, writes some new ballads, and performs at a L.A. Club with an open-mic every week. Meanwhile, Shane is secretly exploring something that might one day become his passion — music and songwriting. Inspired by a lovely girl at school, he takes to writing about his feelings of frustration as a teenager. The bridge Shane makes to his mother while rehearsing one of her songs is very touching.

One of our favorite writers on music, John M. Ortiz, writes in The Tao of Music: "Though it can be written, music cannot be captured. Belonging to everything, it owns nothing. Always giving, never taking, unnoticed, unexplained it benefits everyone. Music evokes what has always been, helping us come to terms with ourselves."

First-time director Jill D'Agnenica makes the most of having real-life mother/son Maggie Baird and Finneas O'Connell do their own singing. The screenplay by Baird and Lori Nasso (who plays her jealous sister Lydia) realistically captures the simmering family tensions. But despite all their angst energy, two people take a shot at following their bliss. Music is the beauty and the bounty which helps them come to terms with themselves. It is a healing balm for adolescents and middle-agers alike. 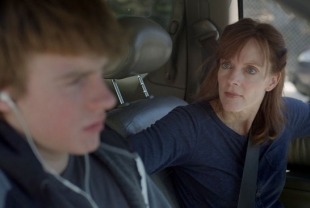 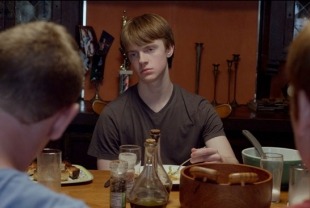 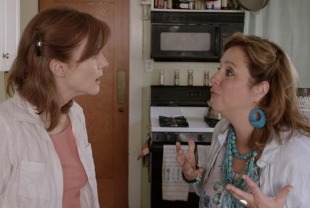 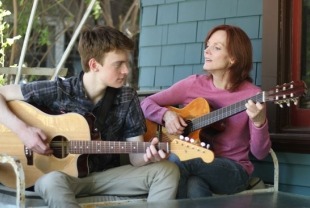