Directed by Various Directors
Another season of making choices between going forward or retreating to the past by the upstairs family and downstairs staff in a 1920s British estate.

Season 4 of the popular series, which airs on ITV in England and on PBS in the United States, is set in 1922 - 1923. Six months have gone by since the tragic death of Matthew (Dan Stevens), and Mary (Michelle Dockery) is in a deep depression. Tom (Allen Leech) is now the manager of the estate and wants her, as heir to her husband's share, to become more involved in Downton's affairs. Her parents, Lord (Hugh Bonneville) and Lady (Elizabeth McGovern) Grantham, are at a loss as to how to help her handle her grief. The Dowager Countess (Maggie Smith), as usual, in a few words, says it best: "You have a straightforward choice before you. You must choose either death or life."

That could be the theme of the entire season: the choice between death or life, going forward with the times or retreating to the past, trusting others or keeping things secret.

For Lady Edith (Laura Carmichael), her choice is love for magazine editor Michael Gregson (Charles Edwards), although this means hiding the consequences of her feelings from her family. Lady Rose MacCLare (Lily James), is now living at Downton while her parents are in India; she embraces all the excitement of the jazz era, even flirting with a black entertainer (Gary Carr), a relationship she knows the family will reject. Mary finds herself faced with two suitors, Tony Gillingham (Tom Cullen) and Charles Blake (Julian Ovenden).

For John (Brendan Coyle) and Anna Bates (Joanne Froggatt) Bates, the choices are very difficult. During a party at the Abbey, she goes downstairs alone and is attacked and raped. Fearful of what will happen if Bates learns of the attack, she decides to keep it quiet, with only Mrs. Hughes (Phyllis Logan) as a confidant. Her changed manner threatens to destroy her marriage.

Other decisions have to be made about the household staff. Cora needs a new lady's maid, a position eventually filled by Baxter (Raquel Cassidy). Thomas (Rob James-Collier) knows some secret about her and uses it to get her to spy on the family for him. Meanwhile, after some hassles, Carson (Jim Carter) decides to hire Molesley (Kevin Doyle's), Matthew's former valet.

The season ends with a 90-minute special set in London. The Grantham family has gone to London for Rose's coming-out as a debutante, an event that includes her presentation at court. Cora's mother Martha Levinson (Shirley MacLaine) and her brother Harold (Paul Giamatti) come over from America for the celebration. In line with the secrets that have peppered Season 4, the storyline revolves around a letter from the Prince of Wales to his mistress.

The DVD includes 30 minutes of bonus video including behind-the-scenes footage of the making of "Downton Abbey." 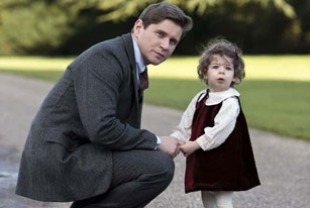 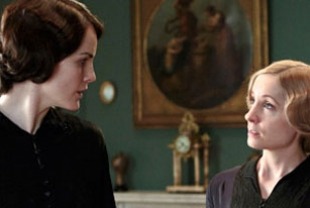 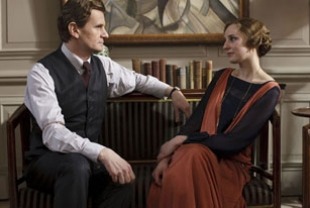 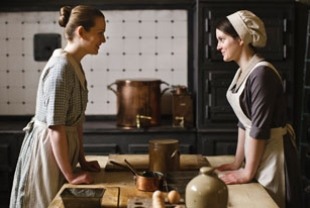