According to a recent national poll, an overwhelming 74 percent of American adults now believe that terminally ill patients who are in great pain should have the right to end their lives; only 14 percent were opposed. Broad majorities also favor physician-assisted suicide and physician-administered euthanasia. But only three states — Oregon, Washington, and Vermont — currently have right-to-die laws that allow physician-assisted suicide.

This Israeli film tackles this complicated subject with a zany opening sequence in which Yehezkel (Ze'ev Revach), a do-gooder in the elderly community, phones a sad and sick old women and claims to be God. His message for her is to not give up hope but to carry on.

Easier said than done when you are wracked with pain or sent to a hospital to die. Yehezkel's close friend Max (Samuel Wolf) is terminally ill and in great pain. His wife Yana (Aliza Rozen) does not know whether she can bear to see him suffer so much. Yehezkel decides to create a mechanical contraption that will enable his friend to trigger the release of a fatal drug into his IV by pressing a button. He is also responsible for getting the assistance of a retired veterinarian Dr. Daniel (Ilan Dar) who agrees to administer some painkillers beforehand. A former police detective will help co-ordinate the procedure and get rid of all the evidence of the illegal procedure.

Things get more complicated after this assisted suicide works. Yehezkel's wife Levana (Levana Finkelshtein) is angry at her husband for his involvement and calls him a murderer. But she seems to be the only one in their senior community who is ethically against the taking of a human life. Soon rumors are flying about the magical machine, and Yehezkel finds himself trying to fend off those who want his help with terminally ill friends or relatives. And much to everyone's surprise, Levana changes her mind about what her husband has been doing when she starts to suffer from dementia. "I am disappearing," she says. "I'm just a shell." 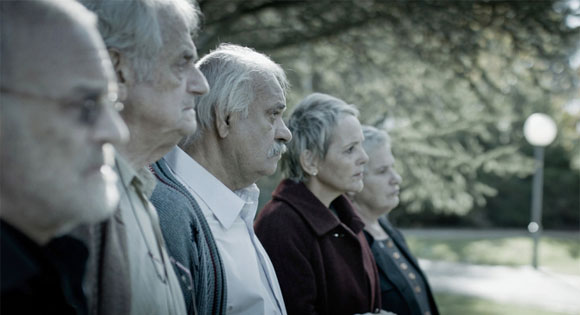 The Farewell Party is directed by Sharon Maymon and Tal Granit, and they have packed this dramedy with the aforementioned comic scene of an old woman talking to God and even an interlude where a few characters express in song their desire for Neverland and an escape from their bodily existence. Yet even with this unnecessary stuffing of the story, many worthwhile points are made about retirement home residents, hospital staff, ethical stands, and the complex moral and legal questions clustered around euthanasia.

At one point a character says, "They're keeping him alive as though dying was a crime." That one sentence conveys the questionable attitude of both institutions and individuals facing this worldwide issue.