Directed by Peter Sohn
A charming story of a dinosaur with a good heart who learns the meaning of courage on his way home after many adventures.

Arlo (voiced by Raymond Ochoa) is born as the dinosaur runt in a litter consisting of his wild and spunky siblings (Marcus Scribner and Maleah Padilla). His father (Jeffrey Wright) and mother (Frances McDormand) work hard in the fields, but they are always worried that they might run out of food in the winter. 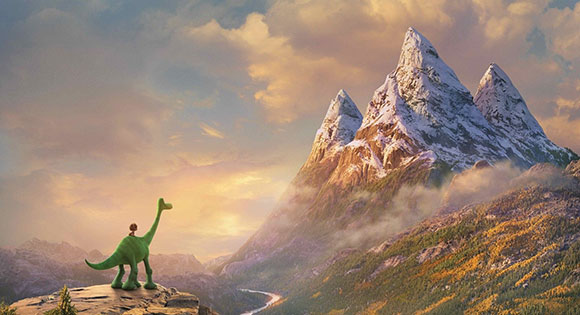 Arlo is constantly teased by his stronger siblings. But his greatest character flaw is that he is frightened by almost everything. The family wonders if he will ever be able to add his own mark to their grain silo to indicate he has done something big.

After discovering that a pesky feral human child (Jack Bright) has been eating their corn, Arlo is given the assignment of killing him. When he can't do that, his father takes him on an outing to firm up his resolve to be a hunter. But then tragedy strikes. During a storm, his father is drowned in a flooding river. Alone with no idea how to get home, Arlo meets up again with the human child. He names him Spot and they become friends. 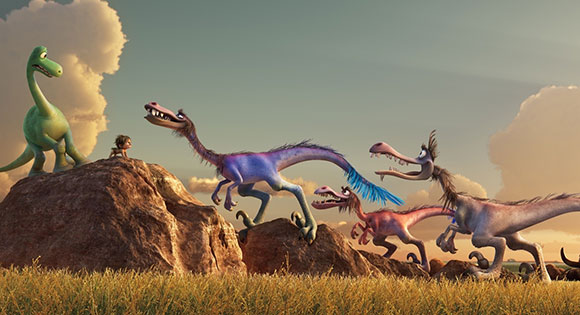 Peter Sohn directs this visually lustrous animated feature written by Meg LeFauve. The setting reminds us of the caverns, river valleys, and mountains of the American West. There are two especially effective scenes: when his father shows Arlo a field of fireflies who light up the night and when Arlo and Spot realize what they have in common by drawing circles in the ground to represent their families. 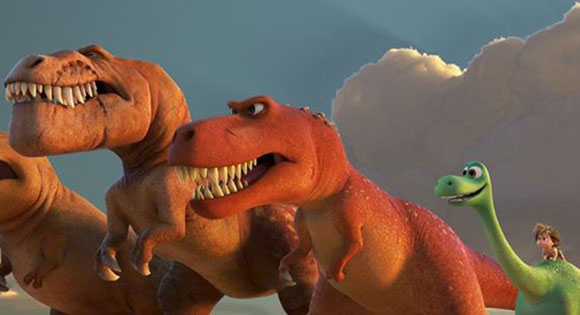 The Good Dragon takes a long time to show that the way to deal with fear is to go through it. As Arlo and Spot try to get home, the dinosaur must face his fears again and again. He also discovers new allies along the way, including a T-Rex family who help him rescue Spot from a nasty gang of vultures. The father of that clan (Sam Elliott) honors Arlo's courage and praises him. It is a magic moment for this dinosaur, just one of many in this Disney/Pixar production.