A Hologram for the King

Directed by Tom Tykwer
A rich drama that is a mix of a cross-cultural gem, a funny fish-out-of-water comedy, and an appealing love story.

It is 2010 and Alan Clay (Tom Hanks) is having a multidimensional midlife crisis. He is divorced, under pressure at work from a boss who no longer believes that he is a great salesman, and feeling guilty for not being able to pay for the college tuition for his beloved daughter (Tracey Fairaway).

But he has a chance to close a big deal that could change everything for him. He travels to Saudi Arabia where he hopes to convince the King to purchase a holographic teleconferencing system for a new planned city. He checks into the Hyatt and heads out the next day for his meetings. 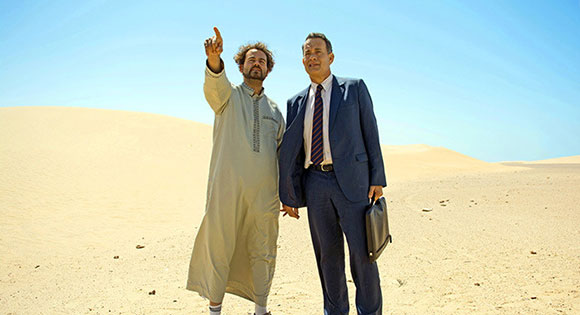 Much to Alan's dismay, he discovers that the city is an hour away and still desert with just one office building and a small condo complex there. He and his young team of three IT technicians are supposed to work in a large outdoor tent with no air conditioning, no food, and weak WiFi. A chilly and evasive receptionist in the main building keeps telling him his contact is out of the office and the King hasn't visited the area in a long time. With his anxiety rising and his patience coming to an end, Alan succumbs to anger and despair. 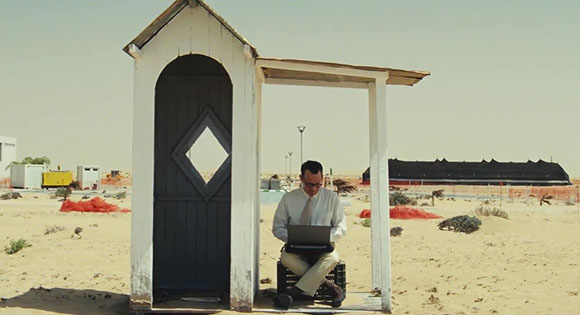 Luckily in the middle of this mess, Alan is befriended by his Arab driver Yousef (Alexander Black) who attended college in Alabama and keeps the global salesman entertained with tidbits about Arab culture and American pop music. Hanne (Sidse Babett Knudson), a sexy Danish payroll contractor, provides him with some booze (which is banned in Saudi Arabia) and offers an evening of pleasure with her. But he refuses her advances and returns to his fancy hotel.

To make matters worse, Alan has a large cyst on his back. After he tries to lance it himself, he ends up in the hospital. This outward physical sign of his external angst and loss of direction leads to a breakdown. He is cared for by Zahra Hakim (Sarita Choudhury), an independent-minded Saudi doctor who sets out to provide the spiritual healing that he so desperately needs. 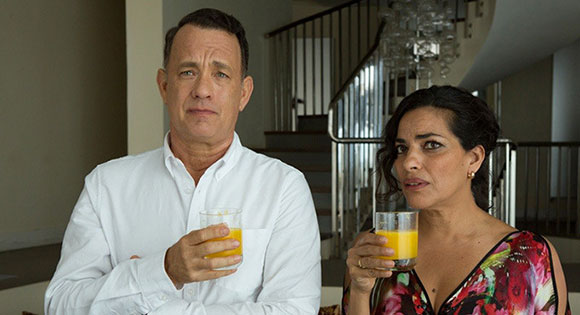 Writer and director Tom Tykwer (Run Lola Run, Cloud Atlas) has adapted Dave Eggers 2012 novel for the screen. It is a cross-cultural gem which refuses to play the Americans-versus-the Arabs game, a frequently funny fish-out-of-water comedy, and an engaging drama about midlife crisis and the transforming power of love.

Tom Hanks wins our allegiance early as the besieged character of Alan tries to regain his balance in a strange culture. A Hologram for the King also manages to present a thought-provoking portrait of globalism where Yousef says "We don't have unions; we have Filipinos" and in a phone conversation with his father (Tom Skerritt), Alan is reminded of his role in bringing about the outsourcing of an all-American manufacturer. This is a content-rich drama that works on many levels and in doing so, turns into a very appealing movie.

R - some sexuality/nudity, language and brief drug use