Screenwriter and director Rebecca Miller has a keen eye for the many and varied challenges faced by women today. Personal Velocity presented three mini-dramas about women going through a period of transition. In a subtheme, she explored the difficulties many of us have in accepting the generosity and kindness of others.

In The Ballad of Jack & Rose, Miller unraveled the intimate bonds between a fiery idealist and his 16-year old daughter. Psychologists who have studied such relationships have concluded that it often takes a woman three decades to come to terms with all the nuances. The Private Lives of Pippa Lee dealt with a woman's midlife crisis and moved on an alternating current between heartbreak and humor. 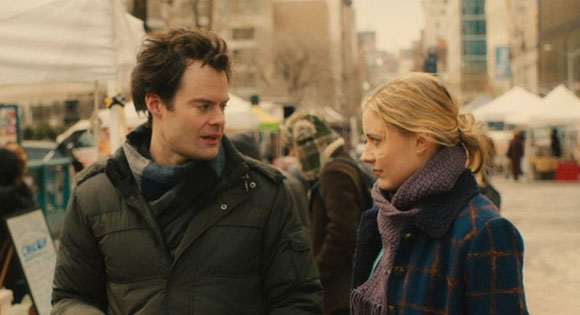 In Maggie's Plan, we meet a young woman (Greta Gerwig) who works at the New School in New York advising art and design students. She lives alone and confides in Tony (Bill Hader), an old college boyfriend, that she is troubled by the fact that she just can't sustain a love relationship beyond six months. Even so, she has decided it is time to become a mother. Her plan is to arrange her own pregnancy with minimal male involvement. For her sperm donor Maggie chooses a college acquaintance, Bill (Travis Fimmel), now an entrepreneur with a thriving pickle business who is eager to please. But before she gets pregnant that way, she falls in love with John (Ethan Hawke), a married professor of ficto-critical anthropology at the New School who is writing a novel in his spare time.

John gives her a draft of his novel to read and Maggie is enthralled with its inventiveness. It doesn't take too long for him to get so caught up in her praise that he ditches Georgette (Julianne Moore), his intellectual wife who teaches at Columbia in the same field. 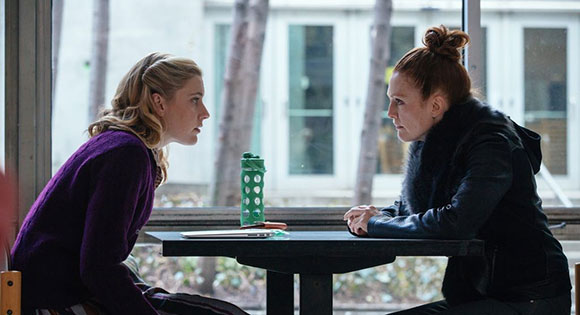 Zipping ahead a few years, Maggie and John now have a child and also spend a lot of time with his two children from his marriage to Georgette. He's still working on his novel. Maggie supports the family financially and also does most of the caregiving. Eventually, she sags under all the responsibilities and feels that she is being taken for granted.

Rebecca Miller, the daughter of playright Arthur Miller, is a gifted writer. In this romantic comedy, she zeroes in on the burdens, frustrations, and follies of love, marriage, and divorce. At the center of it all is Maggie, a control freak who needs to plan everything out in an attempt to overcome life's daily messes and miseries. She is always trying to fix people.

When Maggie realizes that she no longer loves John, she comes up with a scheme to get him back together with Georgette. As we watch her go through the motions of this plan, we realize that it is impossible to control the surprises of life which come our way. As Buddhist teacher Pema Chodron writes in Start Where You Are, it's not ours to fix people or even have expectations for them; we just need to be kind to them. Although she doesn't immediately recognize it, kindness is also one of Maggie's virtues.