Directed by Grant Baldwin
A spunky and edifying documentary on the epidemic of food waste in America.

Excess reigns in the United States and that is especially true when it comes to food: there is too much in supermarkets, too much eaten, and far too much being thrown away. Documentary filmmaker Grant Baldwin and his co-writer Jenny Rustemeyer have created an entertaining, edifying, and spunky movie about a six-month personal project to eat only discarded food. In the process, they discovered a food waste epidemic with many troubling consequences. 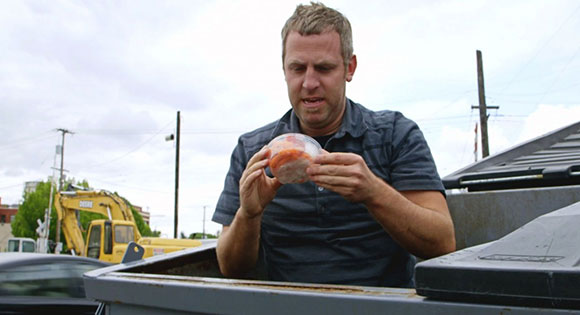 Just Eat It begins with several excursions. One is a visit to Baldwin's brother where they clear out his refrigerator and see how ordinary people purchase too much food and keep too much on hand as a stay against the embarrassment of not having enough food in their refrigerator. Another is a talk with a young man who sells vegetables at a farmer's market and laments the large amount of vegetables and fruits not sold because of some flaws which make them unappealing to consumers obsessed with the aesthetic appeal of foodstuffs.

Grant and Rustemeyer judiciously present commentary on food waste through Dana Gunders, a food/agriculture scientist, and authors Jonathan Bloom and Tristram Stuart. They challenge us to ponder the shocking fact that 40 percent of all the food produced in America never gets eaten. The filmmakers, who live on the edge of Vancouver, scour bins in people's backyards and then come upon a dumpster filled to the brim with packages of hummus. 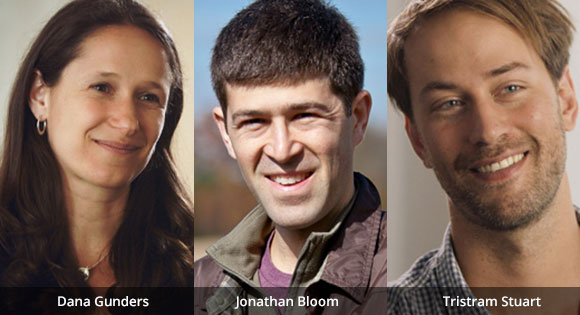 Also on the agenda is a visit to Nevada's biggest food-scrap recycling farm where food from Las Vegas is fed to 2,500 pigs. Perhaps the most stunning revelation is an explanation of the meaning of sell-by dates on products in supermarkets.

Visit the FoodWasteMovie.com for more about this problem and a handy list of "Food Waste Tips for Your Home."