Manchester by the Sea

Directed by Kenneth Lonergan
An elegant and spiritually sobering film about the ways in which guilt, loss, isolation, and self-destruction can erode the foundations of our lives.

"When personal guilt in relation to a past event becomes a continuous cloud over your life, you are locked in a mental prison. You have become your own jailer. Although you should not erase your responsibility for the past, when you make the past your jailer, you destroy your future. It is such a great moment of liberation when you learn to forgive yourself, let the burden go, and walk out into a new path of promise and possibility. Self-compassion is a wonderful gift to give yourself."
— John O'Donohue in Eternal Echoes

Lee Chandler (Casey Affleck) is an unhappy janitor/handyman who lives in a basement apartment and works for an African-American manager of four buildings. He takes out the garbage, paints walls, and unclogs toilets for ungrateful tenants in a lower-class building near Boston. During his free time, this tense and tight-lipped young man visits bars where he frequently gets into senseless fights with strangers. Then his routine and depressing life is upended when he learns that his older brother Joe (Kyle Chandler) has died of a heart attack. Lee takes a week off work and drives to Manchester, a community he left years earlier. 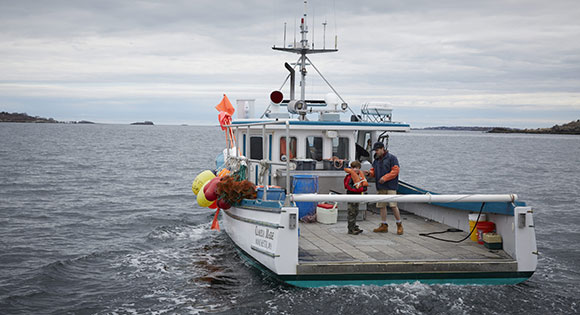 Through a flashback, we see Lee in a happy moment when he, his brother, and his nephew Patrick spent a day fishing together aboard their old boat in the harbor. Now Patrick (Lucas Hedges) is a teenager on the high school hockey team, the leader of an amateur rock band, and a hedonist with two girlfriends.

Lee sees Joe's lawyer and is shocked to learn that he has been designated as Patrick's legal guardian. Patrick has affection for his uncle but worries whether he will rise to the onerous tasks at hand and even if he wants to. Lee claims to be figuring out the logistics, but he clearly questions whether he is the right man for the job. In addition, both of them are bothered by the news that Joe's body has to be refrigerated until the ground is unfrozen and he can be buried properly. 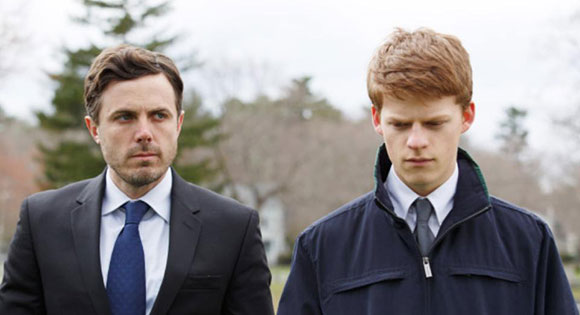 As he chauffeurs his nephew around town, worries about the cost of getting a new motor for Joe's commercial fishing boat, and fends off the flirtations of the mother of one of Patrick's girlfriends; Lee's thoughts turn to the terrible tragedy which led to his divorce from Randi (Michelle Williams) and his self-destructive habits of drinking and brawling in bars. As a further complication, his old neighbors gossip about him in disparaging comments and glare at him on the streets. Lee really gets upset when he discovers that Patrick has gotten in touch with his mother (Gretchen Mol), an alcoholic who has married a Christian (Matthew Broderick) who doesn't take too kindly to her free-thinking son.

Writer and director Lonergan has crafted an elegant and spiritually sobering character-driven film about the chilling dimensions of grief, loss, guilt, and self-destructiveness. As described in quotation above by John 0'Donohue, Lee has locked himself in a prison of his own making and he seems unable to find his way out. From the opening moments of Manchester by The Sea to the closing encounters, Casey Affleck gives one of the most impressive performances of the year, appearing in almost every scene. He conveys the guilt, depression, isolation, and self-disgust of this working-class New Englander whose experiences of a past tragedy have eaten up the foundations of his life. 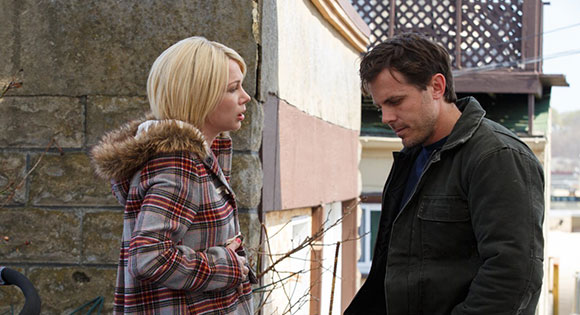 Sufi teacher and writer Kabir Helminski has written in The Knowing Heart: "Love is the force that will heal us of our existential guilt and lift us to a new level of meaning and beauty." The people around Lee offer him that kind of love. Every film viewer who joins him on this journey will have to decide whether or not he will be able to embrace that love as a transforming force in his life.