Directed by Damien Chazelle
A renovated version of the old-fashioned movie musical about making it big in the City of Stars.

Director Damien Chazelle (Whiplash) opens this musical with a lively and jubilant song and dance number (songs composed by Justin Hurwitz and dances choreographed by Mandy Moore) on a crowded bumper-to-bumper LA freeway with the hot sun scorching the stalled cars. A diverse group of people abandon their vehicles and sing about the challenges they face in this capital of entertainment and make-believe.

Sebastian (Ryan Gosling), an impatient young man, gives Mia (Emma Stone) the finger as he drives around her after the traffic jam has cleared. She is an aspiring actress who works as a barista at a coffee shop on the Warner Bros. studio lot. He's a pianist who has a job playing Christmas songs in a restaurant club. Mia happens to come into the place that night just as he deviates from the set list and is promptly fired by the manager (J. K. Simmons). She wants to tell him how much she liked his music, but he rushes out of the club, bumping into her on the way without giving her a chance to speak. 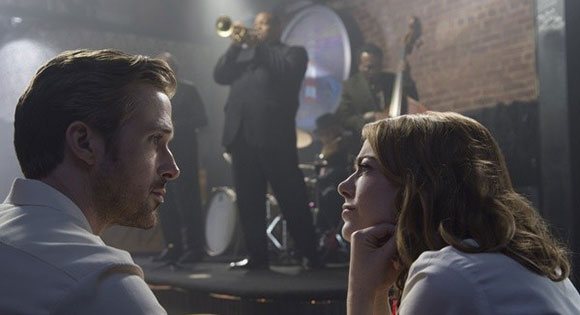 Both of these individuals have ambitious dreams of making it big in La La Land. She endures humiliating auditions and hopes that she will eventually get a break. He wants to open his own jazz club and be his own boss. When they finally do meet and wander around the city, they repeatedly break into song-and-dance bringing to mind oldies but goodies, like the routines of Fred Astaire and Ginger Rogers or Gene Kelly and Leslie Caron.

Their romance sparkles despite grave setbacks to the mutual hopes of making it into the big time. Mia abandons Los Angeles and goes home after her one-woman show bombs. Sebastian downsizes his expectations and joins a band fronted by an old friend (John Legend). The open-ended finale enables viewers to imagine what happens to Mia and Sebastian after they both become wildly successful. 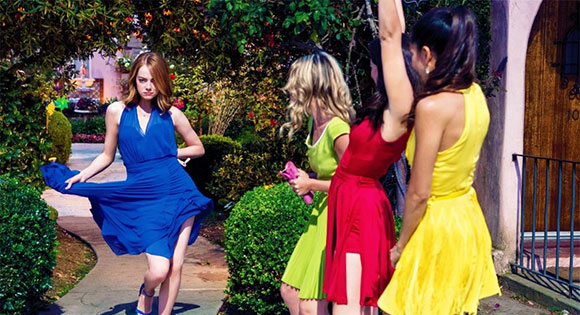 There are many performers who don't flinch when they must give up intimate relationships in order to succeed in their careers. On the other hand, some identify with the messy truth of the old adage that it's best to "be careful what you wish for, because you might just get it." We admit to being partial to the latter, so we were left with a bittersweet feeling about Mia and Sebastian. But true to Hollywood tradition, we knew we could also see the whole story another way.

Whatever ending you choose to take home, know that the chemistry between Emma Stone and Ryan Gosling is impressive, and they do okay singing and dancing. La La Land with its glorious images of LA, the City of Stars, is a renovated version of an old-fashioned feel-good movie musical.