Directed by Kogonada
A mesmerizing film about the poetics of place and the difficult choices we must make to stay true to our passions.

J. Irwin Miller was the president of the Cummins Engine Company in Columbus, Indiana. A Protestant activist, he helped organize the National Council of Churches and was its first lay president. Through his family foundations, the Cummins Foundation and the Irwin Sweeney Miller Foundation, he supported projects in both the arts and religion. We (Frederic and Mary Ann Brussat) have a special place in our hearts for this generous philanthropist as the Irwin Sweeney Miller Foundation gave us the first grant to support our work, in a very real sense launching five decades of our coverage of the arts and the media for religious and secular audiences.

Beginning in the mid-1950s, Miller's foundation told the city of Columbus that they would pay all the architects' fees for new public buildings — schools, churches, libraries, the hospital, fire station, and more. Soon this small town became a veritable Mecca of modern architecture with buildings by Eliel Saarinen, Eero Saarinen, Robert A.M. Stern, I. M. Pei, Deborah Berke, and others. Architects and devotees of this art form have flocked to Columbus over the years. After the deaths of Miller and his wife Xenia, their home, The Miller House, was opened for tours. It is described as "the collaborative masterpiece of Eero Saarinen, Alexander Girard, Dan Kiley, and their patrons, J.I. and Xenia Miller."

J. Irwin Miller would no doubt be very pleased with Columbus, an inventive and romantic film in which the director, Kogonada, uses the city and its architectural treasures as an actual character in the unfolding drama. 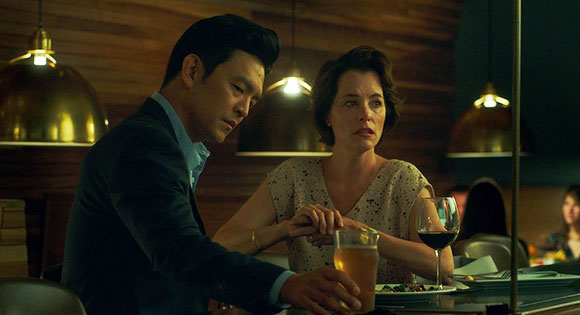 Jin (John Cho) is a Korean-born young man who works translating books and documents from Korean to English and vice versa. He is summoned to Columbus after hearing that his famous father, a professor of architecture, has fallen into a coma. He has not seen or communicated with him for a year. Eleanor (Parker Posey), his father's chief student and companion, is taken aback by Jin's reluctance to spend any time at the hospital given that the old man is at death's door. Jin admits that despite their chilly father-son standoff, if they were in South Korea, he would be expected to be present at the moment of death, lest his father's spirit be doomed to wander the Earth as a ghost.

Casey (Haley Lu Richardson), a recent high school graduate, works in the Columbus library. In one of the opening scenes, she stands near a large bronze sculpture by Henry Moore and she talks to herself about what she would say as a tour guide describing the asymmetrical façade of The First Christian Church designed by architect Eliel Saarinen. Although she has yearnings to become an architect and enjoys serving as a guide to the city's unique buildings, this young woman expects to stay in Columbus to take care of her mother (Michelle Forbes), a recovering meth addict. 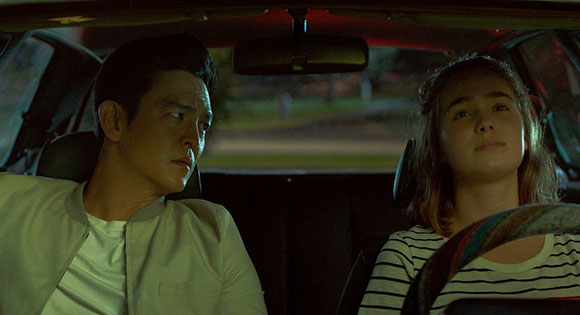 Casey and Jin are drawn to each other at a time when both of them are stuck, unable to embrace change, let alone embark on the process of transition from one role in life to another. When Casey shows him her favorite building, he stops her tour guide lingo and insists she tell him how it makes her feel. Looking at the glass windows of the bridge connecting parts of the Columbus Hospital Health Center, they discuss how its creator, James Stewart Polshek, believed that architecture had the power to heal.

They share many philosophical conversations about modern art, religion, the town's history, and the difficult choices we must make in trying to be true to our passions. Meanwhile, Gabriele (Rory Culkin), Casey's co-worker at the library, has a crush on her and succeeds in impressing her with his keen insight into the antidote to the waning of the Americans' attention span; people only pay attention to what interests them, he says, so the real problem is lack of interest. 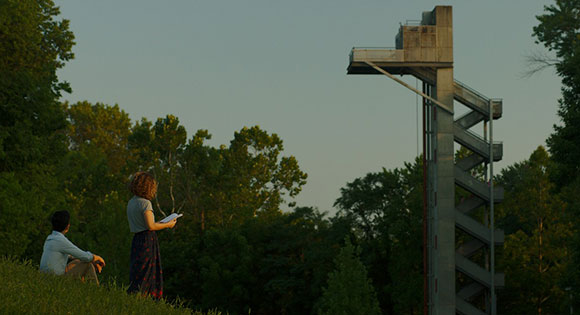 That's not our problem watching this slow-moving and mesmerizing film. Kogonada creates a meditation on the soulful meanings of place by immersing us in this town's beauties and its novelties. We are given plenty of opportunities to appreciate and to honor both Columbus and the two characters who, by yielding to its charms, discover who they are and what they are meant to be.

Best of all the film helps us to strive to meet the following challenge by Wendell Berry:

"My most inspiring thought is that this place, if I am to live well in it, requires and deserves a lifetime of the most careful attention."