Directed by Mike White
An insightful dramedy about a man's midlife crisis propelled by comparisons and envy.

Although all life's transitions are rocky and hard to handle, the midlife crisis is especially traumatic. Psychologists believe that middle age is more a state of mind than a span of years. Writer and director Mike White (Beatriz at Dinner, Year of the Dog) has fashioned a top-notch dramedy that immerses us in one middle-aged man's envy, disappointment, and regrets. He's begun to doubt that he has anything to show for his life. He's starting to ask, "What if?" He finds he's not in love with life as much as he used to be. Worst of all is his habit of running make-believe movies in his mind about the phenomenal success of four college classmates who are much more financially successful than he is. Comparing ourselves with others leads to much unnecessary pain and depression.

Brad (Ben Stiller) is the head of a small nonprofit and lives in suburban area of Sacramento with his pleasant and easy going wife Melanie (Jenna Fischer). She works in state government. With his son Troy (Austin Abrams), a gifted musician, ready to travel East for a tour of several colleges, Brad is already spending sleepless nights worrying about how he is going to pay for his son's tuition expenses. 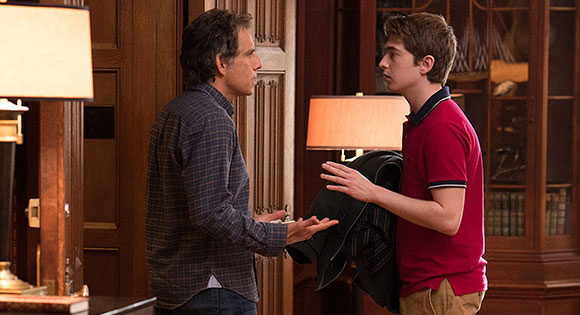 To ward off his fears and apprehensions, this worried dad wonders why he alone of his Tufts classmates has not made it bigtime. In his mind, he sees his old pal Billy (Jemaine Clement), who made a lot of money when he sold his tech company, now savoring his retirement on a Maui beach with two young women. Then there is Jason (Luke Wilson), a hedge fund wheeler dealer who has his own private jet, and Nick (Mike White), a flamboyant Hollywood director with a fancy house recently showcased in Architectural Digest.

After a minor tiff with Troy, Brad tries to upgrade their airline tickets, but he is humiliated by a stern airline agent who says he doesn't qualify given he's bought a budget ticket. This makes him feel like the loser he really thinks he is at this point in time. When Troy tells him that he has a good chance of getting into Harvard, Brad is shattered that he had no idea of this development. But he has a chance to fix things by having Craig (Michael Sheen), another buddy from Tufts who is a bestselling author and lectures at Harvard, get the necessary interviews for Troy. 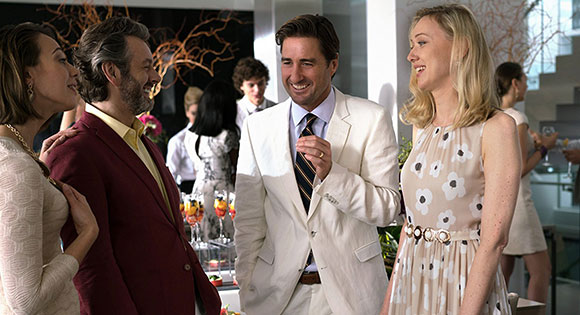 Mike White has written an insightful screenplay that makes the most of Brad's voice-over narration as he struggles to come to terms with his failings and identify any strong points. In his best performance in many years, Ben Stiller conveys the emotions that cause Brad so much discomfort. Austin Abrams works wonders with the role of a good son who tries to understand his father's strange behavior.

In one especially effective sequence, Brad gets another perspective on his life from Ananya (Shazi Raja), a friend of Troy's who is Harvard undergraduate and a member of the Gen-X generation. During a late night talk session, Brad laments his inability to succeed like his friends have. She listens patiently and then observes, "You're 50 years old and you still think the world was made for you." Later, she sums up: "Trust me. You have enough."

We see Brad's Status as a dramedy with some key spiritual lessons. Early in the film, Melanie sees Brad and Troy off at the airport. She says to her husband, "Be happy. Be present." If he had heeded that advice a lot of the anguish and self-doubt that follows could have been avoided. Brad spends way too much time living in the past or making predictions about the future, whereas happiness lies in the present moment. 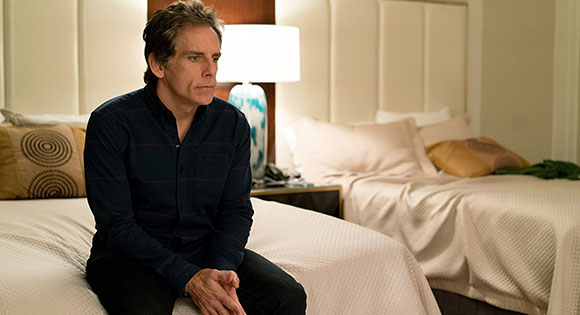 Brad suffers from wanting something more, better, or different. This sets him up continuously for disappointment. The spiritual rx for this is the practice of gratitude – being thankful for what is. Robert Emmons, the world's leading scientific expert on gratitude, writes of its two components in an article titled "Why Gratitude Is Good."

"First, it is an affirmation of goodness. We affirm that there are good things in the world, gifts and benefits we're received.

"Second, we acknowledge that other people — or even higher powers, if you're of a spiritual mindset — gave us many gifts, big and small, to help us recognize and achieve the goodness in our lives."

It takes a few more revelations and plot twists for Brad to catch on, but, thankfully, he does.