Directed by Miguel Arteta
Drama about the values conflict between a New Age holistic healer and a famous real-estate tycoon.

Beatriz (Salma Hayek) is a Los Angeles massage therapist and holistic healer who was born and raised in Mexico. She loves animals and has been in a state of shock following the strangulation death of her favorite goat. Her lifestyle and work have a counter-cultural and New Age texture to them built around a deep respect for animals, nature, and a sustainable world.

After stopping by the Arendale Cancer Center where she has an office, Beatriz drives her clunker car with a broken muffler dragging behind it to give a massage to Cathy (Connie Britton), a wealthy client who lives with her husband Grant (David Warshofsky) in a Newport Beach mansion. This mother has nothing but praise for Beatriz who helped take care of her teenage daughter when she was recovering from chemo. 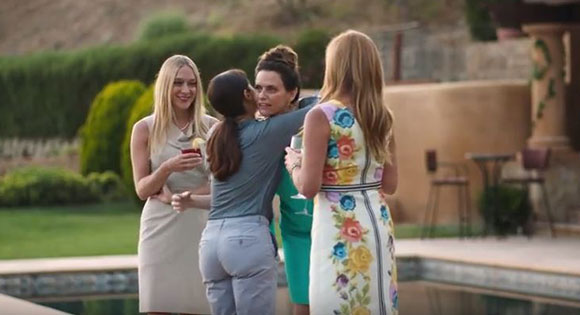 When Beatriz's car acts up and refuses to start, Cathy insists that she stay the night and join her dinner party. The guest of honor is a famous and controversial real-estate tycoon, Doug Strutt (John Lithgow). After the Mexican-born outsider gives the two high society women with him (Chloe Sevigny, Amy Landecker) a Buddhist hug, it is clear to all that a wall separates the rich guests from Beatriz. Feeling awkward, she starts drinking wine.

Upon first meeting her, Strutt thinks she is one of the help and asks her to bring him a glass of bourbon. After taking in their eager enthusiasms about vacations and making more money, Beatriz tells a story from her youth when she felt the pain of a white octopus beaten savagely by her father. Doug later regales the men in the room with his primal adventure of killing a rhinoceros during a safari to Africa. 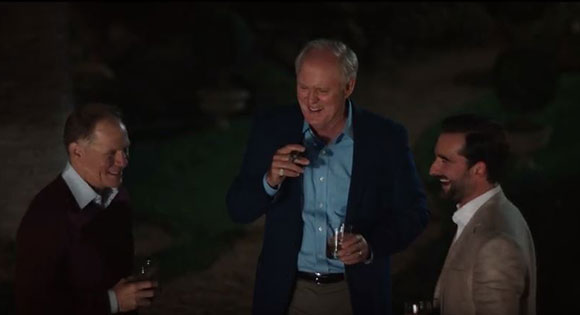 This self-made man boasts of his creative and very profitable real-estate ventures and that sets off Beatriz's memories of a developer in her hometown in Mexico who was responsible for scattering her community and causing financial hardship all around. She sings a sweet song for the group but then launches into a tirade against the selfish, arrogant and heartless capitalist. As she does we sigh in agreement with her — she speaks truth to power and it is very gratifying to witness.

After Beatriz's outburst, we are left dangling. Director Miguel Arteta and screenplay writer Mike White (The Good Girl) have fashioned a compelling New Age devotee who eschews violence and believes in the saving graces of empathy. Her unified vision of life seems to be built upon openness and acting from the heart. So we don't know how to react or which one to accept when the director gives us two possible endings for the story. 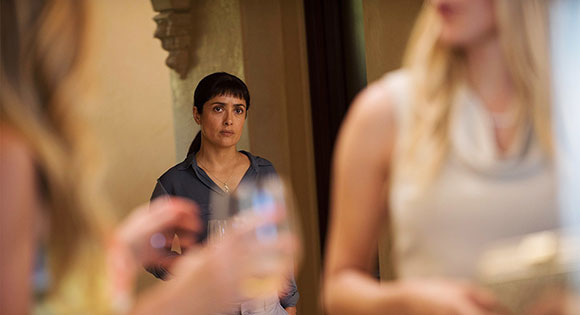 Both endings shock and stun us with their nasty and depressing sting. Given all we know and intuit about Beatriz, we think it would be impossible for her to choose either one of these options without discarding everything she believes and has cherished during her lifetime.

So by all means see Beatriz at Dinner for Salma Hayek's passionate performance and ponder the ways in which the screenplay writer presents the class warfare that divides the United States into two warring camps.

That's two reasons to see the film, and as Meatloaf sang, "Two out of three ain't bad!" As for the dual option, walk away with an ending that works for you.

R – language and a scene of violence