Directed by Spike Lee
A stylish and satirical indictment of the legacy of white supremacy.

The release of Spike Lee's newest joint BlacKkKlansman on August 8, 2018, is hauntingly timely. It marks the one-year anniversary of the deadly “Unite the Right” white nationalist rally in Charlottesville, Virginia, on the weekend that a “Unite the Right 2” gathering takes places in Washington, D. C. The director takes a truth-is-stranger-than-fiction story, dresses it in throwback blaxploitation style, and bookends it with pointed social commentary. The result is an uncomfortably humorous and frenetic meditation on how far U.S. race relations have and haven’t come, often walking the line between funhouse mirror satire and seriously overt critique. 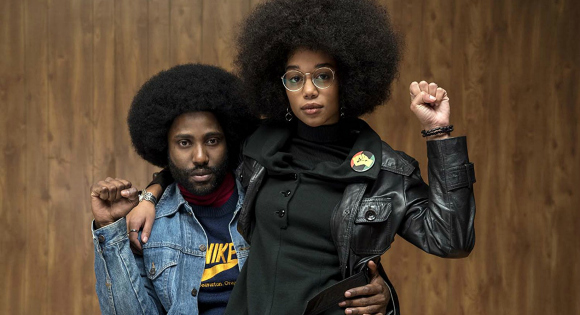 The kernel of truth at the center of the 1970s story gives us a real-life hero in young, gifted, and black Ron Stallworth (John David Washington), an eager rookie Colorado cop who talks his way into a job in his department’s undercover division. His first assignment is to attend a local appearance by Kwame Ture, aka Stokely Carmichael (Corey Hawkins), who has been brought to town by the Colorado College Black Student Union, led by outspoken activist Patrice (Laura Harrier). The scene is rife with combustible beauty, from the fiery, moving speech by Ture (which is accompanied by gorgeously-framed shots of the rapt black audience) to the flirtatious courtship that blossoms between Ron and Patrice.

Ron backs into his next assignment when he spots a newspaper ad put out by a local Ku Klux Klan chapter seeking new members. As a lark, Ron calls the listed number and puts on his best recruit-ready accent to request materials (Ron claims to be able to slip between King’s English and jive with agility and he proves it). To his delight, he is invited for a face-to-face interview and, knowing that his physical appearance will bar him from entrance, he enlists Jewish officer Flip Zimmerman (Adam Driver) to play him in person. 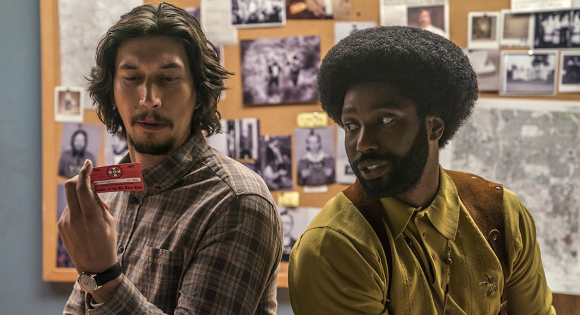 With this move, an often comedic series of close calls unspools, as Ron and Flip tagteam, playing two sides of one KKK-interested initiate, one on the phone, one on the ground. The scenes that follow are laced with winking wisecracks, blunt bigoted language, and sober observations on racism, white supremacy, and the tenuous relations between police and people of color, as Ron tries to maintain an information-gathering in with the KKK as well as a connection to his new lover, whose more radical views push him to own his blackness and history in ways that trouble his desire to move up in the ranks of his department.

As the film swings between slapstick and sincerity, its characterizations keep the story afloat. The white nationalists Ron encounters are never left off the hook, but they are also not mere caricatures. Even David Duke (Topher Grace), the KKK’s unapologetic leader, is presented as a full-blooded, albeit deeply racist and deeply wrong, human being. Good cops are shown working next to bad cops, and in the case of one bad cop, the good cops are partially responsible for his comeuppance. Ron and Patrice in several effective scenes explore the very real tensions between competing loyalties, to one’s people, one’s job, one’s sense of justice and reparations. 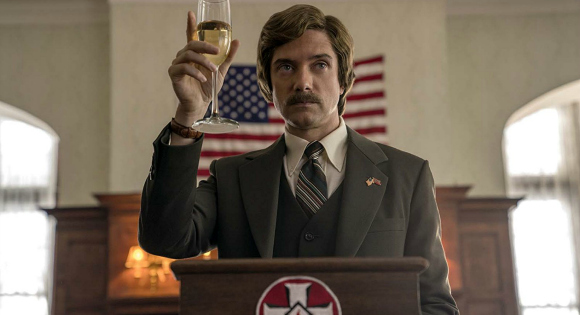 The film, like any real-life story, doesn’t so much end as it does show us how these racist cycles continue, no matter how many heroic acts battle them along the way. When the film’s narrative gives way to a coda of documentary footage of the Charlottesville rally and President Trump’s famously equivocational response to it, Lee’s point is hammered home. But Lee seems distinctly interested in coupling his didacticism with entertainment. He seems sure that the way to move this country to confront its shadows is to do it with some well-earned laughs thrown in. And BlacKkKlansman brings both fun and fury in equal measure.