Directed by Milcho Manchevski
A meandering mockumentary with flights of fantasy and fierce social critique.

Milcho Manchevski’s Bikini Moon makes guilty voyeurs of us all, and that seems to be this messy mockumentary’s main point. By training his critical eye on overeager “humanitarian” filmmakers with questionable ethics, and then ramping up their bad choices until his film explodes in an inevitably bizarre finale, Manchevski succeeds most at asking hard questions: What is authenticity and what is manipulation? What is art and what is exploitation? What is devastatingly real and what is sick delusion? The film doesn’t so much attempt satisfying answers to these questions as it does weaponize them until viewers feel complicit in the slow, but sure, breakdown of boundaries that leaves forever-damaged souls in its careless wake. 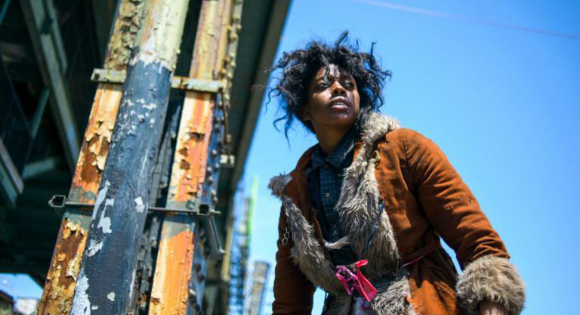 At the center of this satirical skewering of do-gooder documentaries is a perfectly fascinating subject, Bikini, played with undeniable charisma by Condola Rashad. Bikini is a homeless Iraq War veteran who has lost her daughter to the child welfare system and is straddling the line between attractive affability and unhinged outbursts. It’s a tricky role that threatens to veer into parody, but Rashad’s clear control over her character’s journey maintains the beating heart of film, especially as its fragmented narrative threatens to sink into off-putting obfuscation.

We first meet Bikini at a New York City drop-in center where wide-eyed bleeding heart Kate (Sarah Goldberg) works to support the homeless and needy. Kate is a classic liberal stereotype, soft-spoken and dippily progressive, but even in this first scene, her dangerous hypocrisy is apparent: She’s allowing her opportunistic auteur boyfriend Trevor (Will Janowitz) to film the proceedings at the center, invading clients’ space with boom mics and cameras. Amidst this questionable chaos, Bikini proves herself both a compelling client and subject, deftly entertaining Trevor’s crew with a dazzling opening monologue about her past. Without missing a beat, Kate and Trevor make the first in a series of unthoughtful decisions: They decide to help Bikini find a home and to pursue reunification with her daughter, but they also decide to film every single moment of the process. 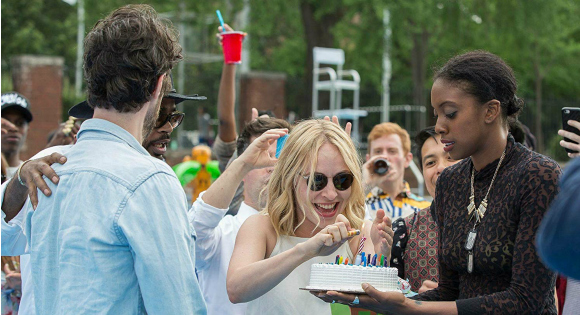 Utilizing footage from multiple sources, including Trevor’s cameras, smartphones, security equipment, and more, Manchevski disorients his viewers until the line between Bikini’s reality and the narrative created by her and Trevor’s calculating filmwork blurs past any recognizable throughline. Along the way, betrayals both artistic and personal complicate matters, leaving whatever original intentions existed to drift away as all involved grasp for ways to validate their own experiences and choices. It doesn’t help that Bikini seems constantly on the verge of a breakdown and won’t take her medication, but given what we eventually learn about Kate and Trevor themselves, Bikini seems far from alone in her questionable mental health. 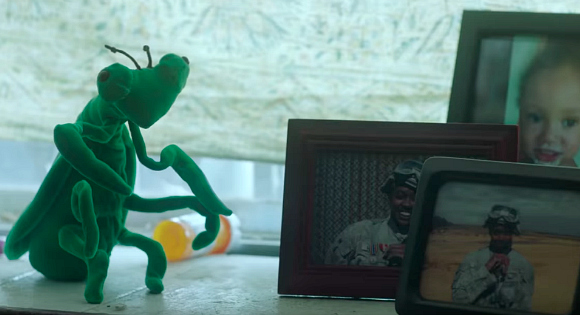 Sown among the madness are moments of beautiful self-inquiry, from Rashad in particular, that often manifest in the subtle shift of a gaze or the brief movement of a finger. A running gag characterizing the praying mantis as a strange symbol of divine soul also gives the film oddly affecting blips of off-kilter power, especially in the final scene, which jerks the already questionable reality into a transcendent sphere that simultaneously makes little narrative logic and packs a whalloping punch.

That final winking moment of incomprehensible beauty seems right in line with all that has preceded it. Real life makes little sense, even as we struggle to create more easily digestible dots to connect, and in the face of such existentialist dread, it becomes the helpers’ task to do no harm as they seek to heal the broken. As demonstrated by these broken characters, the choice remains whether to confront healing with authenticity, humility, and clear boundaries, or to lose oneself and those needing aid in the self-interested fantasy of one’s own manipulative machinations.