Directed by Damien Chazelle
Story of NASA's quest to land a man on the moon and the reluctant hero who took that first historic step.

"We are all Aristotle's children.
which is to say children of
the universe, not just Earth or Mars,
or of this system, but the whole
grand fireworks."
— Ray Bradbury, science fiction writer

We are living in the Space Age. It began on October 4, 1957, when the Soviet Union launched the first satellite, Sputnik 1. Later that year they sent a dog, Laika, into space. The first humans in space and Earth orbit were Yuri Gagarin in 1960 and Valentina Tereshkova in 1963. Alexi Leonov accomplished the first spacewalk in 1965.

The Space Age quickly morphed into a Space Race, as the Americans became determined to not only keep up with the Russians but surpass their accomplishments. The spark that truly set things in motion was an appeal President John F. Kennedy made to a joint session of Congress meeting on May 25,1961:

"I believe this nation should commit itself to achieving the goal, before this decade is out, of landing a man on the moon and returning him safely to Earth."

The space flight to the moon, the moon landings, and the moon walks captured the world's imagination and still do. Who among us has not wondered what it would feel like to be Neil Armstrong, the first man to walk on the moon, or one of the other eleven human beings in all of history to have stood there? This movie asks you to do just that. 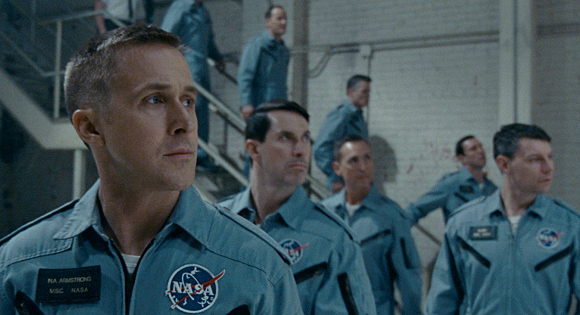 First Man is based on the authorized biography of the life and pioneering space explorations of Neil Armstrong written by James R. Hansen, a former historian for NASA. The book was a New York Times bestseller which reviewer Douglas Brier described as "decoding the enigmatic Armstrong: a space hero short on words but sky-high on Midwestern integrity."

The film is directed by Damien Chazelle (Whiplash) who boldly spends quite a bit of time focusing on the inner struggles of Armstrong (Ryan Gosling) and his first wife Janet (Claire Foy) as private Midwesterners trying to come to grips with their grief over the tragic death of their young daughter to cancer. Right away, we realize that we are being introduced to a thoughtful, private, and sensitive man. 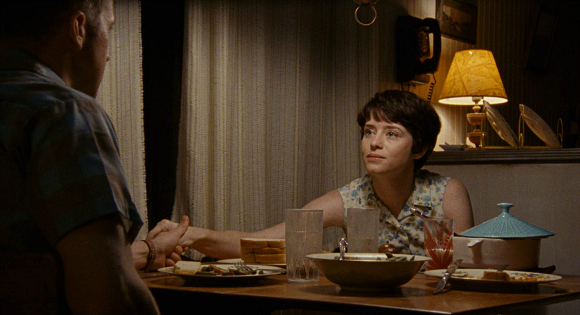 Armstrong proves he has "the right stuff" by working as a test pilot before being selected as a NASA astronaut. As the first civilian astronaut, he constantly impresses his superiors with his rigorous discipline, his love of engineering, and his delight in the challenges of space exploration.

Armstrong is all business. His laser-sharp focus and coolness under pressure are vividly depicted in several scenes where he defies death in mishaps. Three of his friends are not so lucky; they perish when a fire erupts in their module during a pre-flight test. In recreating some of Armstrong's flights — noisy, bumpy, and disorienting — the film conveys just how risky NASA's endeavors really were; you sense that at any moment, it could all fall apart.

Not one for the heroics which would awe the press and the American public, Armstrong is a reluctant celebrity in a time when celebrityhood was already surpassing accomplishment as a reason for fame. At the press conference before their lunar landing mission, Buzz Aldrin (Corey Stoll) exudes about what the significance of walking on the moon and mentions the things he plans to take along as souvenirs. Asked what he will bring to the moon, Armstrong answers, "I'd like to have more fuel." 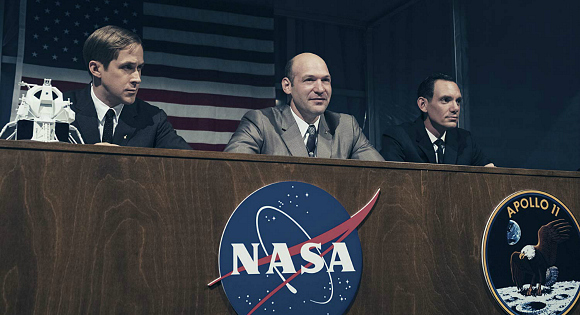 The quest to put a man on the moon was a costly and labor intensive endeavor, involving an estimated 400,000 engineers, technicians, and scientists. While many Americans supported this high expense of $24 billion (close to $100 billion in today's dollars), others found this cost too high. In his critical song "Whitey on the Moon," Gil Scott-Heron asked: "Was all that money I made las' year, for Whitey on the moon? How come there ain't no money here? Hm. Whitey's on the moon."

In eight swiftly moving years, in the face of deaths, setbacks, errors, and disappointments, NASA's Apollo program fulfilled President Kennedy's charge and dream. On July 20, 1969, Armstrong and Aldrin landed the lunar module on the moon as their colleague, Michael Collins, piloted the command module; Armstrong then became the first man to step on the moon's surface.

Many patriotic folk felt that the triumph belonged to America alone, but it was more than that. The audience on television and radio was estimated at 600 million people (one-fifth of the world's population at that time). It was a global experience that forever changed human aspirations.

The moon landing gave hope to people all over the world who took it to heart as permission to cling to their impossible dreams. In an interview in The New York Times, director Chazelle states:

"What I find so poignant and beautiful about the moon landing is that on one hand, from a physical standpoint, it is this almost arbitrary goal — people walking on this barren surface and then returning home. But as a moment of humanity, and displaying what humanity is capable of, there's maybe nothing that can ever top it."

Special features on the DVD include: