Leaning Into the Wind: Andy Goldsworthy

It was 16 years ago that we were swept away by the creative and mesmerizing sense-luscious sculptures of Scottish artist Andy Goldsworthy. In our review of Rivers and Tides: Andy Goldsworthy Working with Time, we reveled in the scenes of the artist working on his projects, exuding a Zen-like appreciation of the natural world, a deeply felt connection with the Earth and all its thousand things, a fascination with time, a reverence for place, and a yearning to explore the energy that is running through the landscape. Sometimes Goldsworthy works change before our eyes and even pass away before we have savored all their mystery and magic. But to the artist, this is all part of the process.

That first documentary went on to become an art house phenomenon. Now the environmental artist and his collaborator, filmmaker Thomas Riedelsheimer, have teamed up again for Leaning into the Wind: Andy Goldsworthy. It is a meditative exploration of the artist's latest creations. In many of them, he uses his own body as part of the art piece. 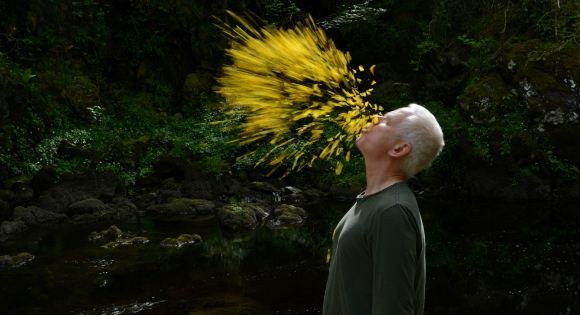 One of our favorites is "Rain Shadows" where he lies down on a city street during a light rain and then gets up, leaving an impression of his body on the pavement. Soon the rain fills it in and Goldsworthy has provided us with another lesson in his abiding interest in impermanence.

His environmental sculptures mirror one of the major themes of Buddhism. As Tenzin Tethong, President of the Dalai Lama Foundation, writes: "Impermanence reminds us that everything we experience is subject to change, both positive and negative, and that this realization can temper our emotions and help us find greater stability and peace within ourselves."

We also appreciated how Goldsworthy, often working with his daughter Holly, uses colored leaves to paint the surfaces of rocks or his own hands. One big shake, and the art piece is gone with the wind. In other work, he throws leaves into the air or blows them out of his mouth. 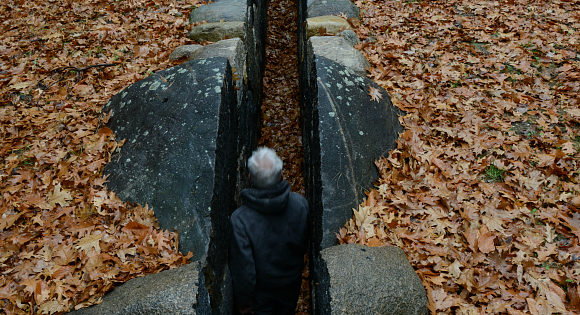 Goldsworthy often works in the landscapes around his home in Scotland. He spent many months creating among the trees and bushes along a creek. He describes his dismay at discovering one day that some of the branches of a favorite tree had been cut away.

In "Sleeping Stones," Goldsworthy makes space just large enough for a body to climb into. In an interview with Elise Nakhnikian of Slant Magazine, he explains:

"Nature, for me, isn't just pastoral and therapeutic. It's those things, but it's deeply disturbing and challenging and threatening and brutal and raw as well as beautiful, and I hope that my work reflects that. I think as I get older, probably, it's becoming more and more so." 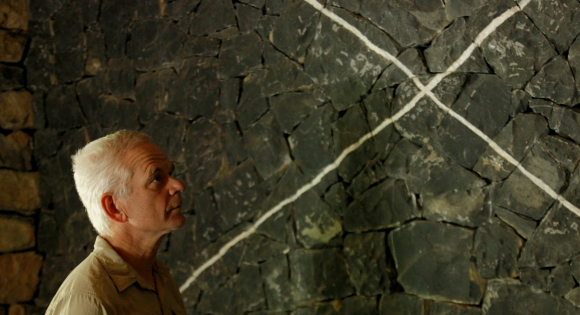 Goldsworthy's multi-dimensional appreciation of nature is convincingly conveyed in an exercise where he struggles to walk through a row of bushes. We imagine the tangle of energies created by the movement of the artist's body and the resistance of the bushes. This work of art evokes for us the struggles of our times as it also reminds us of the incredible beauty all around us.