Directed by Kirill Mikhanovsky
A frantic exploration of community forming amidst chaos.

In a hectic time, when the noise of an endlessly alarming news cycle and the pull of constant communication threaten to overwhelm, Kirill Mikhanovsky’s Give Me Liberty oddly feels like a relatively normal slice-of-life comedy. The specifics of the story reveal a nuanced take on marginalized communities and their intersections, but the sense of unstoppable pressure experienced by Mikhanovsky’s characters also directly connects to a universal need to slow down, breathe together, extend help to those who need it, and ask for help from those who can give it. 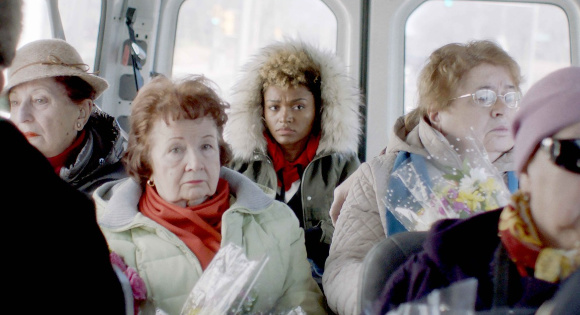 The film is based on Mikhanovsky’s own real-life adventures as a Russian immigrant driving a medical transport vehicle in Wisconsin. Its central heartbeat is the fast-paced decisions and do-gooder mentality of Vic (Chris Galust), a driver swerving between patience and hopelessness as he attempts to navigate roads shut down for a protest against police violence so he can get his clients to their destinations as close to on time as possible. This proves increasingly difficult as he is confronted not only with blocked traffic but the needs of those who should be on the van and those who shouldn’t be on it but could use a lift all the same.

The resulting chaos is a road movie on steroids, with the pace of the thriller Speed (minus the terrorism) competing with the heart of an ensemble dramedy at every turn. For some, this tension might prove too much. The screeching noise and breakneck tempo of all involved is effectively off-putting. But that also seems to be a large part of Mikhanovsky’s point. Give Me Liberty wants to throw its audience into the middle of the maelstrom in order to show us the bridges that can be built, even in the center of a storm. 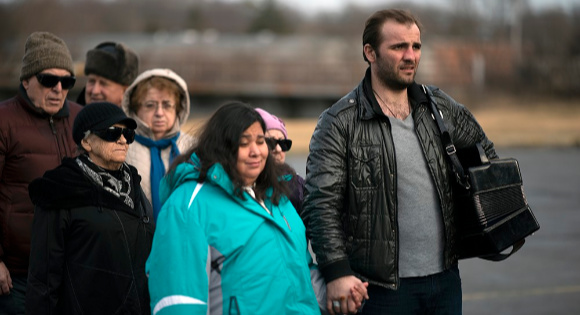 The relentless pandemonium of Give Me Liberty also saves it from spiraling into sentimentality. As Vic picks up and drops off his various riders, the audience witnesses nearly every type of marginalization that can be found in the United States. Race, class, ability, citizenship status, age, and more are all explored amidst the nearly farcical proceedings, but this exploration rarely feels preachy, because it feels so authentic. When Vic stops to drop off some Russian immigrants to pay their respects at a hilariously inept funeral, the gravity and the grace on view is wholly effective. When he stops at the real-life Eisenhower Center and his riders encounter a talent show for the center’s mentally challenged clients, the effect is not one of romantic exploitation but rather of appreciation for the beautiful depth on display among a differently abled group too often celebrated simply and sappily on screen.

The film’s other beating heart is one of these Eisenhower clients and a regular rider in Vic’s van, Tracy (Lauren “Lolo” Spencer), a disability advocate with ALS. She forms a reluctant bond with Vic, even as the hurricane of humanity continues to swirl around them. Tracy and Vic connect over their common desire to help others, even if they both have their moments of exasperated thorniness. When the two enter the fray of the protest itself, the noise and panic grows, but so does the power of their new alliance. Though there are no purely pat solutions to any of the film’s problems, from the effectiveness of the protests to Vic’s vulnerable employment, Give Me Liberty does begin to uncover meaning amidst the mess.

Ultimately, Mikhanovsky’s film piles so many characters and so many situations into Vic’s van that the vehicle’s population begins to resemble a traveling microcosm of the United States: ornery and edgy, demanding justice in large and small ways, trying to coexist while striving for individual and collective dreams of what and who they can be. As the caravan barrels down its meandering path, and as the film alternately speeds and stops to marvel at the growing human intersections amidst the anarchy, Give Me Liberty suggests that looking for humanity in the discord might help anyone to grow into being the helpful human being they wish to see in the world, and that this might be the first tentative step toward learning to travel more generously together.