Directed by Bong Joon Ho
A masterpiece in filmmaking and class warfare dissection.

It is not hyperbole to say that the twists and turns of Bong Joon Ho’s Parasite are so shocking, so well-paced, even so moving that any plot points given away in a review would rob viewers of one of the singular most thrilling film experiences this year. It’s no wonder it won the Palme D’or at the Cannes Film Festival. With buzz, hype, and potential spoilers surrounding it, all one truly should enter the theater knowing is that Parasite is about class, family, opportunity (and the lack thereof), and the economic inequality that destroys lives and divides communities. It is also about spiritual rot, the kind that festers in the dark cracks within society when capitalism regularly rewards a few and casually punishes the rest. But it is also so much more fun, freaky, and mind-bending than it sounds.

Set in two very different neighborhoods of a South Korean city, Bong’s fast-paced plot kicks off immediately by introducing the Kim family, father Ki-taek (Kang-ho Song), mother Chung-sook (Hye-jin Jang), and siblings Ki-woo (Woo-sik Choi) and Ki-jung (So-dam Park). Regularly unemployed and relegated to living in a cluttered sub-basement, the Kims earn what they can, picking up odd jobs and saving money by seeking free wi-fi connections in their ceiling corners, while drunk revelers use the nooks and crannies just outside their small windows to deposit their urine and vomit. 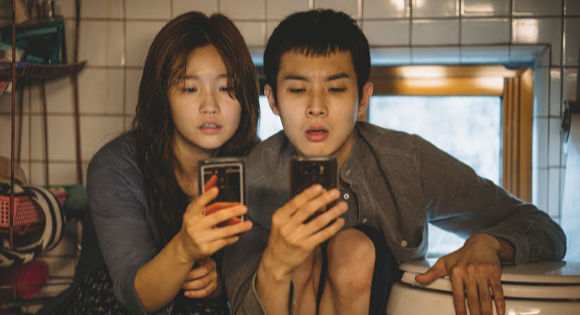 Across town, but also worlds away, the Park family, father Dong-ik (Sun-kyun Lee), mother Yeon-kyo (Yeo-jeong Jo), and siblings Da-song (Hyun-jun Jung) and Da-hye (Ji-so Jung), live in the lap of luxury. The Parks’ enormous, elegant home is kept immaculately tidy by housekeeper Moon-gwang (Jeong-eun Lee), and when shots of its splendor are juxtaposed with the Kims’ squalor, the economic disparity is clearly obvious. Bong somehow gets this division to creep and wriggle underneath the audience’s skin, sowing foreshadowing and unease with uncommon vigor. 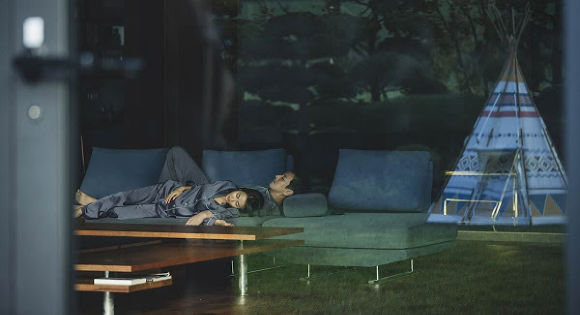 The Kim and Park families meet and become intertwined in one another’s lives in ways that might try credulity, but also happen with such careful, brisk plotting that it all seems ineludible. Within the film’s first few scenes, Ki-woo, aided by his friend Min (Seo-joon Park) who is about to go abroad, is hired as Da-Hye’s tutor, giving him access to the Parks’ home, staff, and secrets. With his growing knowledge, Ki-woo develops a plan to get jobs for his entire family, which means getting rid of the current staff, spreading news to the Parks of qualified people he knows who are looking for jobs, and finding clever ways to keep the Parks from knowing that their new employees are actually all related, living together, and pooling their money in the subterranean shadows.

Conveniently, the Parks don’t pay much attention to things that aren’t right in front of their faces, and soon the Kims have infested their home, parasites content to feed off of the Parks’ oblivious wealth and privilege. But this is not just a simple, naughty twist on Upstairs Downstairs. Bong has more in store than a South Korean Downton Abbey satire. With scenes and surprises that continue to compound, adding up to a 131-minute running time that feels half the length, Bong takes the image of the parasite, the metaphors of upstairs and downstairs, and squeezes, twists, and transforms these tropes into a ceaselessly inventive modern parable. The film works as a koan, never relying on easily-translated allegory, but relentlessly blowing the mind until an entire socioeconomic system is questioned, indicted, and ignited in a blaze of creative fire. 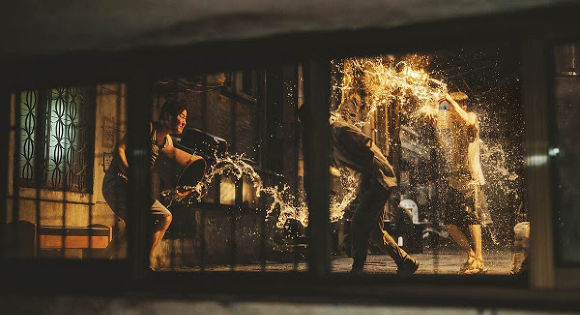 This kind of interrogation might still feel as effective in a gloomier, more self-serious film, but Bong has somehow mastered the art of mining powerful messages in the midst of hair-raisingly entertaining set pieces, breathtaking action sequences, and daffy character development. The balance he strikes between the grave sincerity of his subject matter and the agile levity and stimulating smarts of his filmmaking gifts regularly reveals a deeply spiritual artist, one who wants audiences to pay attention, but who also knows that getting audiences to transform often requires age-old stories to be told in freshly affecting ways.

Parasite burrows far deeper than most films dealing with economic disparity. Its sheer weirdness and wit undergird a profound meditation on the rancid decay at the core of a society that turns up its nose at the stench of truth. It invites exploration of what lies beneath the politely accepted status quos of wealth and poverty with the force of an inevitable revolution. Like the striving family at its center, Parasite is not to be underestimated and will never be forgotten.