Directed by Robert Eggers
A claustrophobic descent into maritime madness.

Even though The Lighthouse is essentially a horror movie, its main and nearly only actors, Willem Dafoe and Robert Pattinson, act up a storm, as though they were sharing the spotlight in a serious new production of some long lost Samuel Beckett play. This is a compliment, as the combination of Eggers’ increasingly wacky visuals and his actors’ increasingly brilliant performances adds up to a strange brew that reeks of classic horror tropes, yet feels altogether uncommon, extremely existential, and absolutely indescribable. 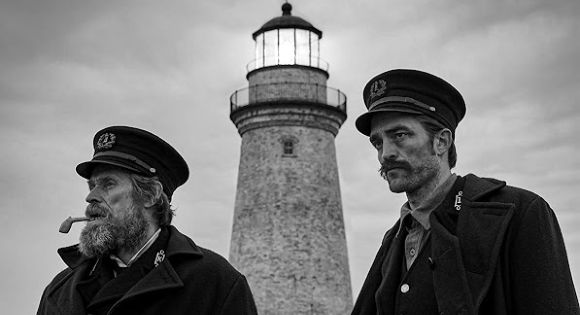 Much like he did for colonial New England witch mythology in 2016’s The Witch, Eggers here both openly celebrates and subtly reinvents mythologies of the sea. Setting his 19th-century tale on a tiny unnamed rock in the middle of the ocean, where a lighthouse spreads beams over the dark surrounding waters, Eggers immediately creates an undeniable feeling of claustrophobia, aided by the fact that he and cinematographer Jarin Blaschke have shot the film in a ratio not too far from a perfect square and in a further constricting black and white palette. Into this small space Eggers tosses two men, Wake (Dafoe), an experienced, ornery, and eternally flatulent lighthouse keeper, and Winslow (Pattinson), a brooding, brutish drifter who has signed on for a few weeks of manual labor. It’s not hard to predict that their time packed together like sardines on an isolated island won’t turn out well.

The script, co-written by Eggers and his brother Max Eggers, is inspired by actual journals and accounts of seafarers and lighthouse keepers, and although there’s no way to pick out the specific moments that these true stories have birthed, the Eggers’ research is apparent and effective. Even with the tiny screen ratio, even with the visages and familiar chops of famous actors filling that screen, the film is awash in authenticity, setting a universally understood sense of dread amidst a setting that is far from familiar to most audiences. As the weeks go by and the nights of drinking, the days of dealing with unpredictable natural elements, annoying seabirds, and the waking nightmares of what might be increasingly disturbing dreams or an increasingly disturbing reality pile up, Wake and Winslow both begin to lose everything, their minds being the most important thing to go.

As each man’s mania floats full-fledged to the surface, the island, already a sort of threatening purgatory, becomes a full-on hell, and the lighthouse, a beacon of glaring light in the midst of the oceanic void, becomes a place of both possibility and palpable terror. Wake won’t let Winslow come all the way up to the lighthouse’s top floor and, as the audience and Winslow begin to only catch in quick glimpses, Wake is doing something truly weird up there. As Winslow sets his sights on getting up into that room, and as the audience becomes more aware of the secrets that both men are hiding, the mood of the film transitions from one of encroaching creepiness to one of abject horror. This deep dive drowns out any remaining sense of hope, but it also plunges The Lighthouse even further into feeling less like a mainstream fright flick and more like a Beckettian classic, albeit one with a beautiful, hypnotizing mermaid, something Beckett never thought to add to his own anxious explorations. 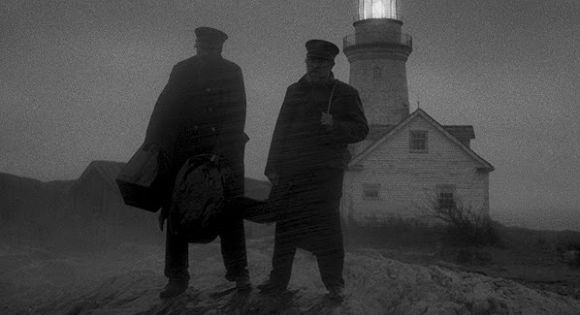 Before the final furious act, The Lighthouse’s tone whips back and forth, filling Wake and Winslow’s long days and nights with no shortage of both ridiculous, sophomoric humor and self-serious monologuing. It’s a playground on which these consummate performers can create characterizations that showcase their gifts and stretch audiences’ expectations, and were it merely this, it might still be enough. But The Lighthouse is interested in more than performance fireworks. It wants to sink into viewers’ skin, especially when its imagery and its characters intentions are at their most inexplicable. It wants to take all the expected elements of examinations of loneliness and swirl them into a manic meditation on anxiety about existential anxiety. And like all good existentialist art, the free will choices of each character seems to spring from their desires to create connection with both their regrets from the past and hopes for the future, but increasingly, these choices mostly conjure discord and disconnect, until neither man seems capable of making rational choices anymore.

The Lighthouse steers clear of landing on any overt moral message, but the power of its images, bolstered by a truly thrilling soundscape and the aforementioned knockout performances, linger long after the film’s final, shocking shot. Its unique flavor won’t be to all tastes, but The Lighthouse is an essential addition to Eggers’ oeuvre and to the horror genre in general. It’s way too visceral to call a psychological horror film, and it’s way too cerebral and well-acted to call a creature feature. Call it an intensely spiritual mindfuck, which is also a compliment.