The Call of the Wild

Directed by Chris Sanders
A rousing adaptation of Jack London's exciting tale of a man and a dog's search for a true home in the Yukon.

Buck is an always lovable, occasionally fierce, very wise, and unusually big canine, a mix between a Saint Bernard and a Scotch Collie. He runs like the wind, savors the pleasures of his body, begs for food, loves to play, and sleeps peacefully after a day's activities. For this adaptation of Jack London's 1903 classic novel, director Chris Sanders used a computer-generated dog which gives Buck a wide range of emotional responses without straying too far from the way dogs actually behave. 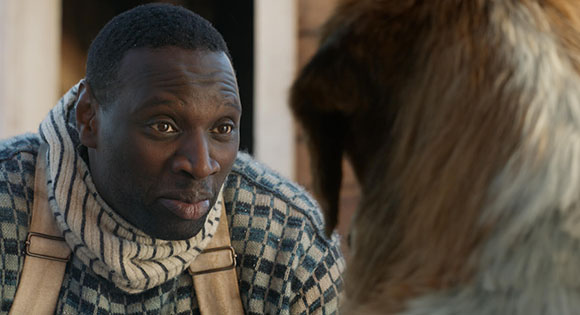 When we first meet Buck, he is living a life of luxury as the pet of a judge (Bradley Whitford) on an estate in California. But soon he is kidnapped and shipped to Alaska where sled dogs are needed in the boom towns created by the Yukon Gold Rush of the 1890s. Buck joins a motley group of dogs on a team pulling a mail sled for a kindly man (Omar Sy) and his partner (Cara Gee). They embark on a 500-mile journey through the mountains. Buck immediately impresses with his formidable strength and quickly learns the tricks of his new trade. Challenged by the lead dog, he also must prove his leadership skills and resiliency. 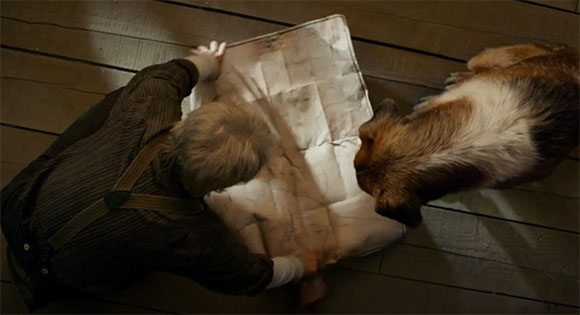 When the mail route is discontinued, the dog team is sold to a greedy man (Dan Stevens) who is determined to get to gold country, even when it means crossing dangerously thin ice with the dogs and his heavily packed sled. Buck is rescued from this dire situation by John Thornton (Harrison Ford), who has come to the wilderness to escape the pain of a family tragedy. These two form a deep bond. John talks to Buck as if he were a brother, and Buck intuits what John needs. Together they embark on an adventure that takes them far away from civilization where both will find a way to an authentic life. 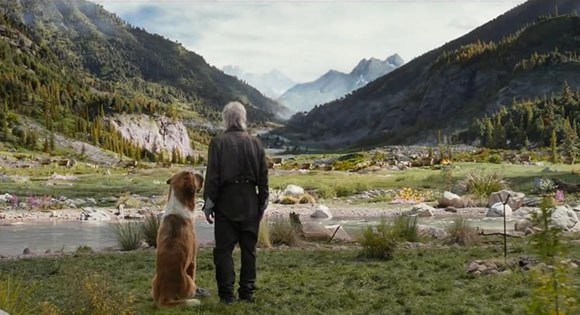 Director Chris Sanders makes the most of the challenges and delights of the wilderness setting. We root for John and Buck as they square off against enemies and setbacks. And we learn from them what is really important. In one scene, Thornton throws large chunks of gold away, keeping only the few pieces to buy groceries in the future; he discovers he really doesn't need much to be content. And Buck, like most dogs a master of living in the moment, is faithful to those who care for him and open to his destiny and his true home. Many viewers, we predict, will be inspired to seek the same.