Planet of the Humans

Directed by Jeff Gibbs
A delusion-shattering documentary on how the environmental and green energy movements have been taken over by capitalists.

Planet of the Humans is available to stream for free on YouTube for 30 days, beginning on April 21, 2020, the eve of Earth Day. Click here to watch the documentary. A discussion with Executive Producer Michael Moore, Writer/Director Jeff Gibbs, and Producer Ozzie Zehner, recorded on April 22, can be viewed here. 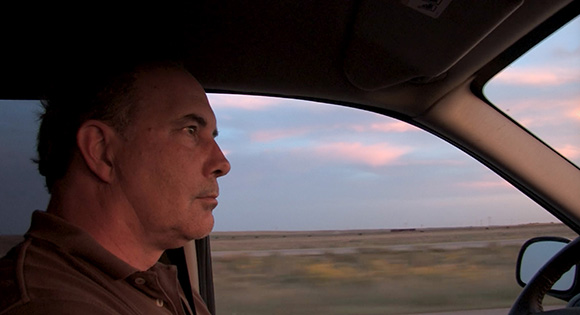 We remember well the first Earth Day. Mary Ann's brother Philip had helped to organize the event, including the big celebration on the mall in Washington, D.C. So we had plenty of advance notice of its significance, and we enthusiastically joined the crowd in New York City's Union Square Park. In the 50 years since, we have remained committed to environmental causes, attending more rallies, making donations to various organizations, divesting from fossil fuels with our investments, and participating in recycling and other projects. Like others, we've hailed the rise of green energy options like solar and wind power. And we've read and reviewed the books and the documentaries by environmental activists.

Watching this documentary, written, directed, and produced by Jeff Gibbs, a lifelong environmentalist, and executive produced by award-winning documentary filmmaker and social prophet Michael Moore, we realized that what we've been doing is not enough.

In fact, what all of us have been doing may not be enough.The film opens with on-the-street interviews with a variety of people asking them how long they think humans have on earth. Gibbs asks his own questions: "How you ever wondered what would happen if a single species took over an entire planet? Maybe they are cute; maybe they are clever, but lack a certain self-restraint. What if they go way, way, way, way, way too far? How would they know when it is their time to go?" Sobering questions, especially in light of the delusion-shattering information to come in the next two hours.

Let's start with the promise of green energy, embraced by President Barack Obama, airline owner Richard Branson, philanthropist Michael Bloomberg, 350.org founder Bill McKibben, the Sierra Club and other environmental organizations, and a large percentage of the public. Electric cars, solar panels, and wind turbines were to be the alternatives to a reliance on fossil fuels, but it hasn't turned out to be that simple. An electric car is charged from an outlet powered by the local company that relies on coal and natural gas. A site for wind turbines in Vermont requires that a forest be cut down, a mountain-top removal similar to what seen in coal country. In an upsetting sequence, we see all the materials that have to be mined, transported, and processed to make solar panels. And still, both solar and wind power requires a backup system for rainy and windless days -- which turn out to be power generated by burning fossil fuels. Gibbs asks: "Can machines made by industrial civilizations save industrial civilizations?" 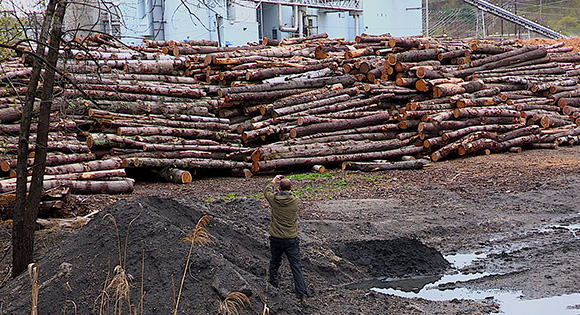 When solar and wind did not provide the answer, biomass became the energy alternative -- most often the burning of wood chips made from trees and waste wood, like old railroad ties. But just because trees can be planted and harvested, does that make them a sustainable form of energy? What about the fuels used to power the machines cutting down the trees and converting them into chips?

Nevertheless, environmental "leaders" have jumped on the biomass bandwagon. Bill McKibben, having noted that trees grow much faster than the thousands of years it takes to make coal or oil, is shown speaking at a stockholders' meeting about how biomass must happen everywhere. Robert Kennedy, Jr., and Al Gore, both known for their environmental stands, are also defenders of this "sustainable" solution. One of the few opposing voices is Indian activist and anti-globalization author Vandana Shiva, who says: "We are talking about the old oil economy trying to maintain itself now through another raw material, the green planet. . . . The big crisis of our time is that our minds have been manipulated to give power to illusions. We shifted to measuring to growth not in terms of how life is enriched but in terms of how life is destroyed." 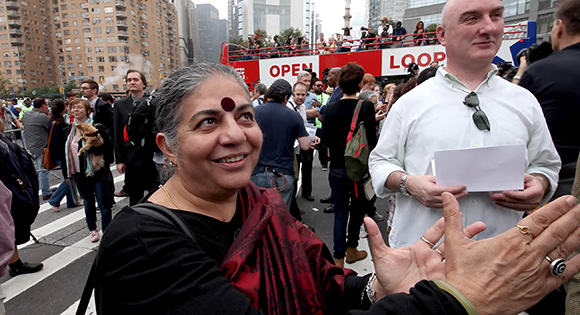 With plenty of examples to back up his arguments, Gibbs posits that we are turning what was left of nature into profit. Whether we are burning trees, killing animals to render their fat for use as a liquid fuel, or harvesting seaweed and algae to fuel Navy ships, the natural world has become just another product in the profit-making system. As leaders join boards and endorse various strategies, the "takeover of the environmental movement by capitalists is complete."

Planet of the Humans may seem to be an odd choice of a film to release on Earth Day, an annual feel-good event that is usually associated with celebrations of the planet, excursions in nature, and lots of speeches about how much good is happening. We don't like to think about the negative and shadow sides of the environmental movement. But Gibbs says:

"I truly believe that the path to change comes from awareness, that awareness alone can begin to create the transformation. There is a way out of this. We humans must accept that infinite growth on a finite planet is suicide. We must accept that our human presence is already far beyond sustainability and all that that implies. We must take control of our environmental movement and our future from billionaires and their permanent war on Planet Earth. They are not our friends. Less must be the new more. And instead of climate change, we must at long last accept that it is not the carbon dioxide molecule destroying the planet, it's us. It's not one thing but everything we humans are doing, a human caused apocalypse. If we get ourselves under control, all things are possible."

What we need is the spiritual practice of reverence, radical respect for the Earth and all the beings -- animate and inanimate -- upon it. All the spiritual traditions have taught and recognized that reverence is a transformational practice both for individuals and societies. Thomas Berry, a Catholic priest, a historian of religions, and a "geologian," put it wisely in his classic book The Dream of the Earth:

"The change that is taking place on the Earth and in our minds is one of the greatest changes ever to take place in human affairs, perhaps the greatest, since what we are talking about is not simply another historical change or cultural modification, but a change of geological and biological as well as psychological order of magnitude. We are changing the Earth on a scale comparable only to the changes in the structure of the Earth and of life that took place during some hundreds of millions of years of Earth development.

"While such an order of magnitude can produce a paralysis of thought and action, it can, we hope, also awaken in us a sense of what is happening, the scale on which things are happening, and move us to a program of reinhabiting the Earth in a truly human manner. It could awaken in us an awareness of our need for all the living companions we have here on our homeland planet. To lose any of these splendid companions is to diminish our own lives. "To learn how to live graciously together would make us worthy of this unique, beautiful, blue planet that evolved in its present splendor over some billions of years, a planet that we should give over to our children with the assurance that this great community of the living will lavish upon them the care that it has bestowed so abundantly upon ourselves."