Directed by Richard Gray
Melancholy drama about a Scottish king's period of discernment.

Those expecting a thrilling and violent film similar to Braveheart will be somewhat disappointed by this melancholy story about a bedraggled 14th century Scottish king whose will to resist the English and secure the freedom of his people seems to have vanished. He (Angus Macfadyen) battles and defeats his closest political rival (Jared Harris), but then he tells his exhausted men to go home, declaring their fight against the English is hopeless. With a price on his head, he is wounded by some bounty hunters. 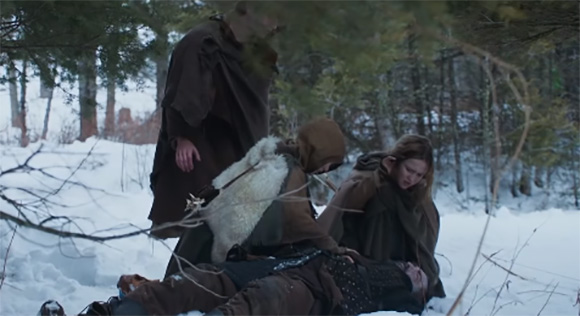 He is discovered and taken in for nursing by Morag (Anna Hutchinson), a widow whose husband served in his army. She lives in a remote cottage with her niece (Talitha Bateman) and nephew (Brandon Lessard). Her ten-year old son (Gabriel Bateman) is still grieving his father and blames Robert the Bruce for his death. Director Richard Gray is to be commended for not trying to make an addendum to Braveheart in which Mel Gibson as William Wallace continually shouts about Scottish independence. Robert the Bruce comes off as a different kind of leader. But his heart is softened during his stay with this family when he realizes how much the land means to them. We appreciated the subtle anti-war message that seeps through the story along with the realistic depiction of the king's period of discernment.