Directed by William Nicholson
An old-fashioned drama about love and divorce that touches the heart.

Edward (Bill Nighy), a high school history teacher, and Grace (Annette Bening), a gifted poetry anthologist, live in the coastal town of Seaford, England. They are approaching their 29th wedding anniversary from very different perspectives. She thinks they have overcome rough spots in their marriage and asks Edward, "We are happy aren't we?" to which he evasively replies, "Why shouldn't we?"

Like many couples who have weathered storms and resiliently discovered ways to keep their relationship alive, these two seem to have run out of strategies. Grace cannot let go of her habit of getting both irritated and angry at her husband's emotional vulnerability, his soft-spokenness and his refusal to fight with her. Edward, for his part, has concluded that he is always going to be inadequate in Grace's eyes. He empathizes with the wounded soldiers who were dumped off wagons on the Napoleonic Army's retreat from Moscow in 1812. 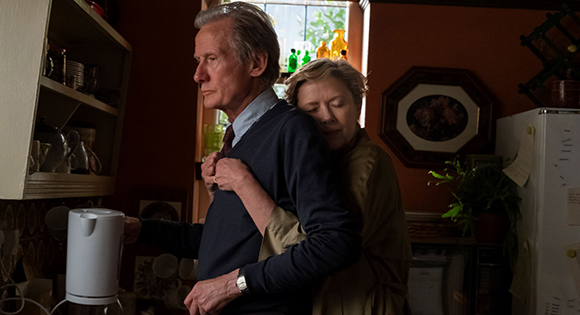 Edward has decided to retreat from his unhappy marriage and invites their grown son Jamie (Josh O'Connor) for a visit so he will be there when Grace finds out. Although he often has heard his parents squabbling, Jamie is quite taken aback when Edward states that the marriage was always doomed as a mismatch between two people who had little in common. "She'll be better off without me," he says. But the real bombshell comes when Edward confesses that he has fallen in love with another woman who accepts him for who he is.

Grace's reactions to the shattering news are explosive. At first she doesn't believe it. Then after Edward moves out, she realizes he is indeed serious and she plunges into despair. Jamie, a very reluctant go-between, is ordered to tell his father to come home. Then Grace does a deep dive into strange behavior, such as naming a new puppy Eddie. Sensing that her beloved son is siding with his father, she lashes out at his religious faithlessness and inability to sustain an intimate relationship. It is left to Jamie to come to terms with the meaning of his parent's divorce and its ramifications for him. A breakup is sad and complicated, and it doesn't always move along a predictable path. 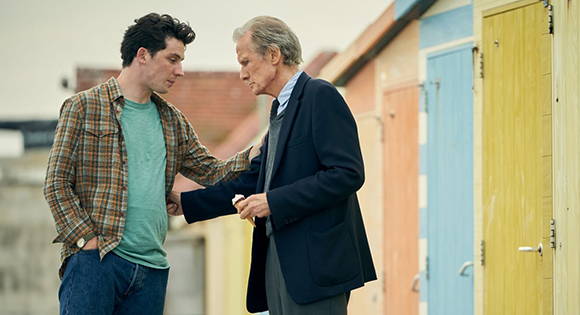 Hope Gap is written and directed by William Nicholson whose credits include the Oscar-winning movie Gladiator and the play Shadowlands and the 1993 film about the late-blooming love of religious scholar C. S. Lewis and the American poet Joy Gresham. His lyrical style is evident throughout Hope Gap, which has one of the best screenplays of recent films.

It is a treat to watch Benning and Nighy hoist the heavy weights of Edward and Grace's separation after so many years together. Similar to costume dramas, there are a number of small but telling scenes which shed light on these people who are trying desperately to come to terms
with grief and loss. You can learn a lot from how someone picks up broken dishes in the kitchen. Or from the kind of room where they seem the most comfortable.

In one of these revealing and poignant scenes, Edward asks Grace: "Why is it you only ever drink half your tea, I wonder."

She responds with an answer that sums up all that has happened:

"I wonder that, too. I suppose it's because I don't like things to end."

It is scenes like this one that enable Hope Gap to touch our hearts.