Directed by Andrew Ahn
A cinematic masterwork on dealing with transitions.

When we first meet Kathy (Hong Chau), an Asian-American single mother, she is having one of those days when everything seems to go wrong. With an odd mixture of eagerness and fear, she and her eight-year-old son Cody (Lucas Jaye) are driving to the house of her sister who has recently died. They were twelve years apart in age and barely knew each other. The plan is to clean up the place, get rid of all the things and memorabilia left behind, and then sell the house.

Imagine Kathy's shock when she opens the door and discovers that her sister was a hoarder. Financially strapped, she has no other choice but to handle this mess all by herself. While she works, Cody befriends Del (Brian Dennehy), a quiet old man who lives next door. When her son seems to gravitate towards this gruff widower and survivor of the Korean war, Kathy abandons her initial distrust of this neighbor; he seems like a saint compared to another neighbor, a bigoted mother (Christine Ebersole) whose two rowdy sons give Cody a hard time. 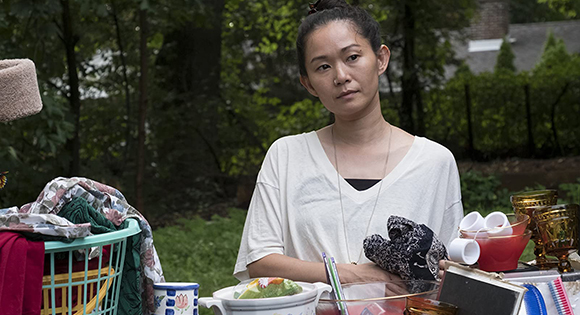 Korean-American director Andrew Ahn has done a remarkable job presenting the emotional responses of the three lead characters who are all stuck in transition — that empty, in-between time when men and women, young and old alike, are caught up in feelings of uncertainty and anxiety about the future. Kathy experiences many emotions as she sorts through the possessions of the sister she never knew and wished she had.

Cody, who is both a smart and over-sensitive kid, is hungry for the attention and affection of a male figure in his life since his father is gone. This time in a new place becomes an opportunity for him to discover what a friendship with another male can be like. One afternoon, his mother returns home to find him on Del's porch reading. She is very pleased and her son elated when the elder says of Cody: "He's good company."

Their friendship deepens when Del shows up for Cody's birthday party and takes him and his mother to his favorite spot — the local VFW building where he and his buddies regularly play bingo together. Some news from his daughter puts Del in the painful stage of transition as well. 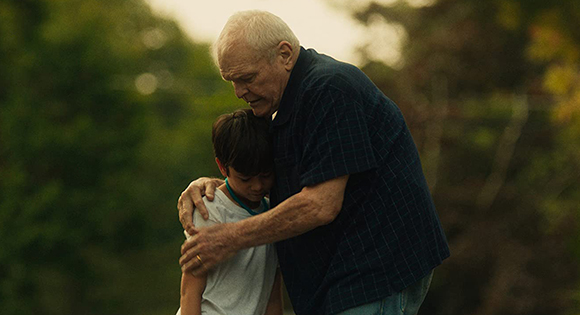 The screenplay by Hannah Bos and Paul Thureen is so focused that even the title "Driveways" may refer to the transition we make in our cars from the street to the house. And only a driveway separates Kathy's house from Del's.

This movie takes within its ample embrace the themes of the difficulties of negotiating transitions in our lives, the beauty of cross-cultural friendships, the sometimes natural ease between the young and the old, and the kind of patience and creativity it takes to make a house into a home.

The tour de force performance by Brian Dennehy, one of his last before his death in April 2020, is another reason why we have chosen Driveways to be one of the Most Spiritually Literate Films of 2020. It is a cinematic masterwork that takes your breath away with its screenplay, acting, and subtle directing by Andrew Ahn.